Alan Clawley has spotted that plans for the redevelopment of Birmingham’s Paradise Circus seem to be lacking something. 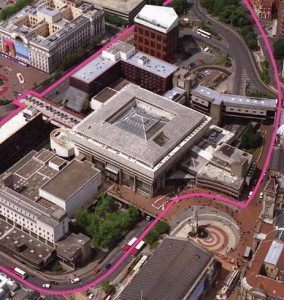 Has anyone noticed that there isn’t a single tree on any of the Paradise Circus presentations that were recently submitted by Glenn Howells for planning permission. This is puzzling as modern architects are normally very keen to show images of mature trees in front of their buildings to soften or camouflage them.

Paradise Circus is not over-endowed with mature trees. There are 3 outside the Town Hall where the buses stop, and about 10 in the garden opposite. At the north end of the site, there is a stand of trees in the traffic island. None of these trees is likely to survive the upheaval planned for the site. Surely we like trees in the city centre so why not add some new ones?

The answer to the conundrum lies in the contradictory and inconsistent set of ideas that constitutes town planning in the city centre.

The truth appears to be that we can’t have trees as well as long vistas. New Street is a prime example of this; 30 years ago there were no trees in New Street and the Town Hall could be seen from any part of it. When the choking traffic was removed in the 1990s and the street was paved over for people to walk along, the council also planted a line of plane trees. These fine trees are now quite mature but they completely block the old view of the Town Hall.

Some people would not sacrifice a single mature tree for a vista however fantastic, but in Paradise Circus the City Council has made great play of opening up new vistas. A new pedestrian street, roughly the same width as New Street, has been intentionally laid out to provide a view of the Council House Clock Tower from Centenary Square.

Now having set such great store on a vista, why would the council block the view by planting trees there?  In the same way Congreve Passage is to be widened out to improve the view of the back of the Town Hall from Great Charles Street.

Will trees only be planted years later when people have got bored with the vistas and have forgotten that they were used to justify a scheme that was designed primarily for maximising returns for the developer?

Buses are also missing from the architects’ presentations. The part of the Queensway which Clive Dutton once described as the place where traffic ‘thundered past the Town Hall’ (and where the existing trees are) is shown free of buses and cars on the architects’ sketches. This is another puzzle, especially as Centro published its plans almost the same week showing Paradise Circus as one of the city’s ‘permanent’ Bus Interchanges. 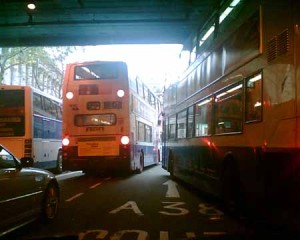 No doubt Howells will say that these are only outline plans, but they already illustrate a worrying inconsistency in city-wide planning policy. Worse still they show a lack of co-ordination with the public transport planners. Birmingham people suffer all the time from the after-effects of hasty, muddled or short-term planning. The City planners have had ten years to plan Paradise Circus. It now seems ironic that John Madin designed the 1974 Central Library with a bus station in the basement.