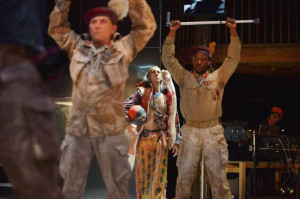 Shakespeare’s Troilus and Cressida is referred to as a ‘problem play.’

Not because the author wrestled with great issues of the heart or mind. But simply because  late Victorian critics, who liked to put things in a box, simply could not manage to slap it into a category. Not a drama, nor a history nor a comedy but a…problem.

The plot is simple enough: The Greeks have ground to a halt in the seventh year of the Trojan War. They are sullen and stripped of war’s  glory. Inside the besieged city, Prince Troilus falls in love with sweet Cressida. But she is given to the Greeks in a trade off for a captured soldier. In the Greek camp, she turns turns romance on its head, showing herself to be devious and not at all loyal to her lover.

Add to this sly cynical  dig at heroism and romance is the collaboration between the Royal Shakespeare Theatre and the edgy New York-based Wooster Group  and there is bound to be an interesting if not  bizarre take on this play written in the dying days of Queen Elizabeth when the whole world was about to be upended.

And, boy, these two groups certainly do upend things. The NYC troupe play the Trojans as American Indians, suited and booted in buckskin and armed with heavy duty twangy Canadian accents. The RSC signs up for the opposing  Greek roles  as macho Brit troops encrusted in sand. Greek hero Achilles is petulant and lazy, sullen in his tent as the icon of homoerotic langour, only emerging when he is in a red ballgown that falls from his muscular body.

Slap these two viewpoints together and worlds collide.

At times, it’s not pretty. There is too much to take in and in a play built on tricky  debate (some think it was originally written for a legal audience), too much is lost in the shuffle, too much visual and aural noise that obscures  Shakespeare’s most effective weapon- his elegant use of words.

In short, the beauty and intrigue of Shakespeare is cloaked. Not revealed.

One other point: with the combination of  American and British theatre troupes, what is noticeable is how the English actors grab Shakespeare to illuminate the depth of his work. The Americans (and I speak as a bone fide Yank) mangle the metaphors, garble the speeches, and simply mumble inb their Manitoban accents.

Hats of, though,  to actors Joe Dixon as a lubricious  Achilles, Zubin Varla as a camp wheelchair bound  Thersites  and  Scott Handy as the crafty Ulysses who has to energise a Greek army that has run out of ideas.