City’s business, residents and visitors urged to get involved

The city’s #BigupBirmingham campaign continues to grow with new billboard posters appearing across the city yesterday (Friday 24th August). The posters from Signature Outdoor, which feature the #BigupBirmingham logo, have been launched to welcome athletes competing at the Aviva Birmingham Grand Prix this weekend. An impressive list of 16 Olympic gold medallists will compete at the event in the city this Sunday – including double gold-medallist Mo Farah.

The posters have been placed at key sites across the city and are the latest in a series of activities to push the #BigupBirmingham campaign. The campaign started after city supporters took to Twitter to highlight Jamaican sport stars Usain Bolt, Yohan Blake and Warren Weir’s comments as they ‘bigged up’ Birmingham at the Olympics two weeks ago.

Visit Birmingham, the city’s leisure tourism programme run by Marketing Birmingham, has been helping to build the campaign with a #BigupBirmingham social media push, Olympic inspired stunts, national and international media activity and the launch of a unique twibbon that can be downloaded to users profile pictures on Facebook and Twitter.

The twibbon has been added by almost 300 people on Facebook and Twitter since its launch last week. High profile supporters including US drama Homeland star David Harewood, who was educated in Birmingham; Olympian Mark Lewis Francis and Heart FM presenter Ed James. Local businesses have also been quick to support with Birmingham Hippodrome, The Cube, Brindleyplace and Colmore Business District all sporting twibbons on Twitter.

Emma Gray, Director of Marketing Services for Visit Birmingham, said:  “The reaction to the Jamaican athletes’ comments was incredible. They stirred up a real sense of pride and got people talking about how great our city is. We have building on this by encouraging those living in and visiting the city to show their support and ‘big up’ what they love about Birmingham. The posters are another way to keep people talking about Birmingham and the ‘big’ welcome we offer.”

While #BigupBirmingham started organically on social media, Visit Birmingham is now looking at how it can incorporate it into its ongoing promotional campaigns for the city.

Gray continued: “Everyone has really got behind this campaign and with the T20 cricket match between England vs. South Africa, ArtsFest and Style Birmingham – as well as freshers’ week all coming up, there are a number of opportunities for the city to show it off and get visitors to the city involved.

“We are asking people and businesses who love this city to use the campaign – its logo and hashtag – to promote Birmingham’s ‘big’ offer and keep us feeling proud of our city.” 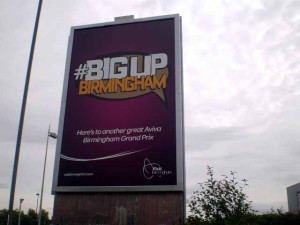 Birmingham’s appeal as a visitor destination continues to grow. Last week new figures showed that the city attracted 740,000 more visitors last year. Visitor numbers rose to 33.5m in 2011, up from 32.8m in 2010. The overall value of the city’s visitor economy is now £4.9bn.

Businesses who are interested using the logo, or have any ideas on how the #BigupBirmingham campaign should develop, should contact Visit Birmingham through the website www.visitbirmingham.com