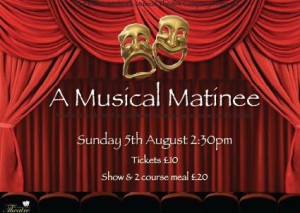 The Old Joint Stock Musical Theatre Company proudly presents ‘A Musical Matinee,’ a cabaret of musical theatre on a Sunday afternoon – it does exactly what it says on the tin! Including songs from THE SOUND OF MUSIC, MISS SAIGON, CABARET, THE BOOK OF MORMON, BARE, RENT, GREASE, THE LION KING, MARTIN GUERRE, THE ADDAMS FAMILY, CAROUSEL, WEST SIDE STORY, SPAMALOT and many more….

The New Theatre Initiative (NTI) is a new partnership between in a moment theatre practitioners and the Old Joint Stock Theatre. We will be running a series of NTI Workshops aimed at stimulating the creation of new theatre here in Birmingham, inviting Actors, Writers, and Directors to make theatre together. The workshops will culminate in a performance (11th September), showcasing the newly created works to a paying audience at the OJST.

In this cycle of NTI Workshops we will explore the use of sub-text in Chekhov and how using Meisner helps actors fire the lines of a play.

Sam McNulty’s hit comedy time-travelling variety show comes to the Old Joint Stock in Birmingham. Originally the bassman with Cov’s finest punk combo, Squad, Sam went on to be part of The Giraffes and later The Two Giraffes, teaming up with the very sadly missed Steve Edgson.

“A true champion of the local scene and beyond”- Coventry Telegraph

A 4-day improvisation comedy workshop for 13-18 year olds giving teenagers a fantastic opportunity to learn improvised comedy in a fun and supportive environment. This workshop is a one of a kind in Birmingham: it uses the art of improv to offer children a fun and exciting way to expand their imaginations whilst nurturing important life skills. Kids improvise all the time without realizing it – we will harness that creative power with improvisation games and lots and lots of laughter!

A one day workshop which will guide you through the practical steps towards creating your own solo performance. At the end of the day you will have a short piece and a detailed map to help you create performances in the future. An invaluable session for aspiring solo performers of all ages in dance, theatre, music, storytelling and beyond.

What does it take to create a successful soap? Dozens of writers? Months of planning? Millions of pounds? Not if you’re Foghorn Improv! In this show we will create a gripping improvised soap opera from start to finish, using nothing but audience suggestions and our own imaginations. No scripts, no rehearsals, but plenty of laughs, tears, and leaps into the unknown from Birmingham’s latest and loudest improvised comedy sensation: FOGHORN IMPROV!

Rumchum Theatre Company return to the Old Joint Stock with this new One Act Comedy Thriller by Richard James. An amateur actor auditions for the lead role in a local production of Hamlet. Has the actor more in common with the Prince of Denmark than meets the eye?