Howard Elston, our sport correspondent, reveals how fighting fit  Syria will work hard for victory in  the London 2012 Games

Syria today threw down the gauntlet on the international sporting stage and said it will prove victorious in the Olympic medal table.

As its troops made final preparations for the its initial event- Surround a City and Pummel It to Murderous Surrender-President Bashar al-Assad said:  ‘Our country will show the world and James Bond that this regime is tops when it comes to international fair play,  violent competition and fighting for gold.’

The President added: ‘We will show the real Olympic spirit by leveling Aleppo. Our thuggish  and valiant soldiers have been training for months and  their unique skills will help us, in true Olympic style,  go street by bloody street, killing women, kids and rebel suspects who are guilty because they live in this great city of ours.’

‘Our training has been site specific: The Damascus urban ghettoes and Homs have especially been used to get up to medal potential.’ 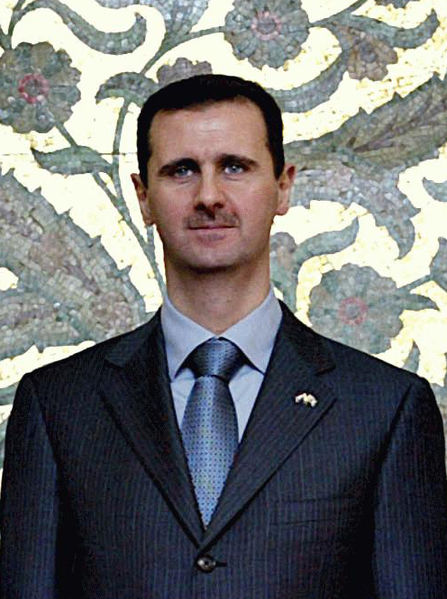 Syria’s high profile Olympic spirit has touched the world. The BBC will have live coverage on  8 of its HD and 3D  channels for the quarter finals and finals of the Aleppo siege. There will also be top class  post match commentators which will include rebel bosses, Syrian intelligence officers, Mitt Romney and Gary Lineker.

And not to be ignored is Syria’s doubling up with North Korea in the mixed doubles Chemical Warfare  Cross Country  event brought to you jointly  by China’s Human Rights Campaign and Irn Bru Lite.

The regime  has also approached Danny Boyle, the creator of the stupendous Opening Ceremonies, to see if he can re-create all the pizzazz for the Syrian domestic war, possibly illustrating this proud nation’s fascist politics and its  freedom loving roots going back to King Nebuchadnezzar with the use of pageantry, dance and high explosives.

Phil from Leeds, an Olympics expert and a secondhand car dealer, commented: ‘Watch Syria sweep the boards. If you want to zone in on one thing, I would go for the 8-a-side torture events held in the Underground Chambers below the Velodrome. You can’t beat Damascene skills on this-  even the CIA used them after 9/11.’

+The Birmingham Press  and Sir Howard will cover Syria’s bloodthursty regime in its Olympic bid for glory for the next fortnight.