The Midlands’ most popular arts centre, mac birmingham, officially launched its 50th anniversary celebrations on Saturday with the opening of The Playmakers, a brand new exhibition which reflects the centre’s history. 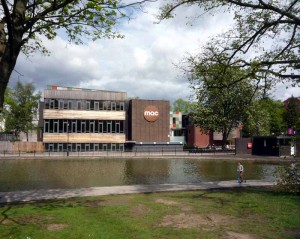 Since opening in 1962, mac birmingham has welcomed millions of visitors and artists from both round the corner and around the world. The latest exhibition, The Playmakers (Sat 7 Jul – Sun 9 Sep), has been created by Japanese artists KOSUGE1-16 to draw from mac birmingham’s past – from its beginnings as the UK’s first arts centre for children and young people, and an internationally-respected creative hub for experimental puppetry to its present-day ethos of providing arts for all in a culturally rich and diverse city and region. The interactive installation encourages children and adults to play with lots of cause-and-effect features such as life-size puppets of John English and his wife Alicia (Mollie) Randle, who initiated mac birmingham as a cultural institution.

The Playmakers is the first part of ‘mac at fifty’ – a special programme of events, activities and exhibitions to mark the centre’s 50th year. The next major exhibition at mac birmingham will be a retrospective of Birmingham-based photographer Vanley Burke (Sat 22 Sep – Sun 18 Nov), whose photographs of the Handsworth area of the city tell the story of the Jamaican community in the area, a microcosm of the community in the UK, since the 1960s. In November, the gallery will be transformed into The Woods (Sat 1 – Sun 30 Dec), for the return of Jane Packman Company’s stunning exhibition/performance piece which was first shown at the centre in February 2011.

‘mac at fifty’ also includes Knick Knack and Doo Dad (Tue 13 Nov – Sun 2 Dec), an exciting and fun new festive show for families from Lyngo Theatre featuring CBeebies’ Patrick Lynch and Italian children’s television star Carlo Rossi. Co-commissioned with the Lowry in Manchester, characters Knick Knack and Doo Dad will teach audiences how to have fun no matter where they are… even on an island made of rubbish.

The ‘mac at fifty’ programme will continue until September 2013, with riverside art-walk Sounding the River concluding the celebrations. Artist Jony Easterby, who took part in art workshops at mac as a child, will bring together a collective of performers and musicians to create a magical nighttime walk along the River Rea which runs outside the centre.

Dorothy Wilson MBE, Chief Executive and Artistic Director of mac birmingham commented, “mac birmingham is celebrating 50 years of inspiring artists, communities, businesses and audiences. This is a perfect opportunity to shine a light on all that is best and lasting of the centre’s focus on providing unparalleled opportunities for creativity. Its core ethos for 50 years, working from very first beginnings to international acclaim, mac birmingham provides space for everyone; recreational and professional artists, first timers and old timers, doers and watchers; to enjoy making and engaging with art together, realising their own self-expression and appreciating the art and artistry of others. mac really is for everyone – a gateway to the arts.”

Ros Robins, West Midlands Director with Arts Council England, said: “Many congratulations to mac for reaching their 50th year and being such a successful arts venue. Arts Council England is proud to have contributed to the funding of the £15million building project which was completed two years ago and which revitalised the facilities. mac continues to go from strength to strength appealing to all ages and communities with their wide programme of activities.

“Arts Council England continues to provide regular funding to mac birmingham and we wish them well for the next 50 years!”