Greater Birmingham and Solihull Local Enterprise Partnership (GBSLEP) welcomed the Government’s City Deal for Birmingham – that has, it is claimed, the potential to create nearly 11,000 new jobs.

It represents a major shift in the powers and levers available to local leaders and businesses in order that they will be able to shape their economic futures, boost local growth and get the national economy going.

GBSLEP has been instrumental in the negotiations with Cities Minister Greg Clark to secure the unique deal which will focus on investment in life sciences, expansion of the Green Deal programme and the launch of a ‘Skills for Growth Compact’. This will aim to commit employers, colleges and schools to investing in skills and guaranteeing work opportunities for learners.

It is projected that this approach will result in a quarter of the City’s businesses taking part and the creation of 3,560 apprenticeships.

The City Deal will also create GBS Finance – an investment fund of £1.5bn. This will manage, invest, recycle and leverage a number of public and private sector funding streams to deliver local infrastructure projects whilst becoming a model for sustainable funding and growth.

It is anticipated that, as a result of the new financial powers, in excess of £15bn of private sector investment over 25 years could be secured. 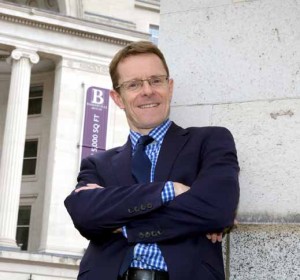 Andy Street, Chair of the Greater Birmingham & Solihull Local Enterprise Partnership, said: “From the moment we were invited by Government to put together our vision for the City Deal, we looked at our assets and the key economic challenges before setting about outlining the proposals that will bring about sustained economic growth.

“Not only will the City Deal support immediate job creation but it will also improve our skills base and invest in our infrastructure to meet the economic needs of the future.

“This is the first step towards a new way of working with Government, providing the foundations upon which to build through further negotiations.

“We welcome the Government’s commitment to the City Deal and the opportunity it gives us to fulfil our potential.”

He said: “Giving back power from Whitehall has been a cornerstone of this Government. This step-change in local government funding will result in more dynamic, forward-looking cities and I’m delighted to see the innovative and exciting housing projects Birmingham is already investing in.

“This deal will give the city the powers and tools it needs to drive growth and boost its economy. With the creation of a city-specific investment fund, this government is putting in place the conditions to allow enterprise to flourish and grow our economy.“

The City Deal is focused on delivering diverse economic benefits for the Greater Birmingham and Solihull area. Incluiding:

Leader of Birmingham City Council, Sir Albert Bore added his support, saying: “City Deal comes at a time when Birmingham and the wider area is enjoying renewed confidence and has, for the first time, all of the building blocks for success in place.

“We have a strong private and public sector partnership, a strategy for growth and, now, a deal with Government that will give us the powers to rebalance the economy.

“For this to be a truly successful and globally competitive city region we need to maximise our full potential in areas such as Life Sciences, where we already have a leading position internationally.

“There is much more to be done, but the City Deal is testament to the strength of the relationship between the public and private sectors and the local authorities involved.”

“Over the coming months, we are transferring more and more power from Whitehall to your city.

“Birmingham is an economic powerhouse – so it makes sense that the city decides for itself how to boost the local economy.”

Cities Minister Greg Clark concluded: “This deal will make a huge difference to Birmingham’s potential to grow its local economy, and become even more of a beacon for investment.

“There has been huge support from the private sector for this deal and Birmingham will now reap the benefits of new financial freedoms and investment opportunities available to them.”