Store manager spends 24 hours as a donkey for local charity. 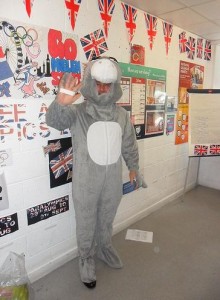 Dominic Zeall, Manager of Sainsburys, Castle Vale, will be spending 24 hours in the store dressed as a donkey and sleeping on a straw bed to raise funds for a local charity

Dominic Zeall, Manager of Sainsburys, Castle Vale, will be spending 24 hours in the store dressed as a donkey and sleeping on a straw bed to raise funds for a local charity that provides riding therapy with donkeys for children with additional needs.

What: To celebrate The Donkey Sanctuary’s Birmingham centre becoming the charity of the year for Sainsburys Castle Vale, Store Manager Dominic will be held in a donkey stall in the store for a full 24 hours to raise sponsorship money. Shoppers are also encouraged to bring books and cakes to sell on the day to help boost Dominic’s fundraising total.

Two donkeys from the therapy centre will be visiting the store on Friday 20th July to offer encouragement and support Dominic.

Admission: The store is open to the public from 8am until 10pm

The Donkey Sanctuary has been providing donkey riding therapy sessions to children from all over Birmingham since 1994. Around 180 local children with additional needs and disabilities visit the centre each week for therapy sessions. The charity also provides outreach visits with donkeys to residents of nursing homes, hospices and care homes. Services are provided free of charge and the centre relies upon public donations as it does not receive government funding.

About The Donkey Sanctuary

International animal welfare charity The Donkey Sanctuary was founded by the late Dr Elisabeth Svendsen M.B.E. in 1969.  It supports projects to alleviate the suffering of donkeys in 28 countries worldwide, including sanctuaries across Europe, where more than 15,000 donkeys and mules have been cared for, and major projects in Egypt, Ethiopia, India, Kenya and Mexico, where donkey welfare is improved through community education and veterinary work.  It also provides donkey-assisted therapy for children with additional needs and therapeutic visits for elderly people in the local community from centres in Belfast, Birmingham, Ivybridge, Leeds, Manchester and Sidmouth.