Tim Mason, professor of chemistry at Coventry University, has been awarded an honorary degree from one of Europe’s most prestigious scientific institutions, in recognition of his contribution to the field of sonochemistry. 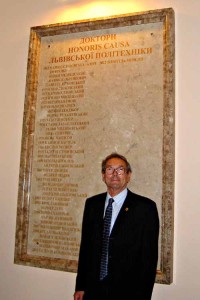 Professor Tim Mason in front of the role of honours board at the Lviv Polytechnic National University.

Professor Mason’s degree, which was bestowed by the Lviv Polytechnic National University in Ukraine, is only the 22nd the institution has awarded in 100 years – the first was given to Marie Curie in 1912.

The presentation took place earlier this month at the 13th European Society of Sonochemistry (ESS) conference in Lviv, western Ukraine, which was also one of the host cities for the recent Euro 2012 football championship.

Professor Mason is the director of the Sonochemistry Applied Research Centre at Coventry University. He began his research around sonochemistry – the study of ultrasonic waves and their effects on chemical processes and reactions – in the 1970s, and has since published 15 books on the subject and contributed chapters to numerous others.

In 2011, Professor Mason’s groundbreaking work on a non-invasive cancer treatment was identified by the Research Councils UK as being amongst the most important research projects taking place in universities today.

His research team pioneers the use of ultrasound – a technology normally associated with medical scanning – to treat tumours by focusing sound waves intensely on the affected area of tissue to heat up and destroy cancerous cells.

The technology, known as High-Intensity Focused Ultrasound (HIFU), is non-invasive, with patients who have been successfully treated reporting no pain or side-effects.

Sonochemistry has enjoyed something of a resurgence in the past few decades owing to technology developments, and there are now an array of research programmes investigating the application of ultrasound in a number of fields including health, food processing and environmental protection.

Professor Mason, who is also president of the ESS and editor-in-chief of the Elsevier journal ‘Ultrasonics Sonochemistry’, said: “There are a number of milestones in a scientist’s life: gaining a PhD; publishing a first research paper; writing a first book; and also – as I have just discovered – being awarded an honorary degree.

“I am very proud to have received this accolade, because such an award reflects how well regarded you are by your peers. It is particularly humbling to appear on the same honours board as the world-renowned scientist Marie Curie, Lviv’s first honorary doctorate recipient exactly a century ago.”