The second Birmingham Food Fest cooked up a culinary treat for visitors with a fantastic week of food and drink themed events and restaurant promotions across the city earlier this month. 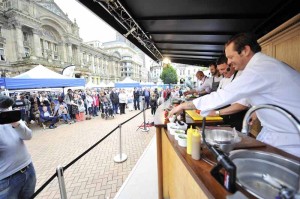 CBD Food Festival 2012, one of the launch events for Birmingham Food Fest

The opening weekend kicked off with CBD Food Festival in Victoria Square, showcasing the excellent food and drink offering in the city’s commercial quarter, Colmore Business District, and Brindleyplace’s Birmingham Chilli Festival, which attracted a combined 18,000 visitors to sample the city’s culinary delights over two days. The festival launch, which featured cooking demonstrations from local chefs, stalls selling delicious local produce, live music and the hotly anticipated annual chilli-eating competition, set the stage for a great week of food-filled activities across the city.

Birminghamfoodfest.com, the festival’s central hub for visitor information, attracted over 34,000 page views in the month leading up to the event, whilst a series of ‘do-it-yourself’ style infomercials urging people to get creative in the kitchen attracted over 9,000 web hits. The videos, filmed as part of the festival’s promotional campaign, featured cooking tips and recipes from Birmingham’s local culinary stars, including Michelin star chef Glynn Purnell, Lasan’s Aktar Islam and David Colcombe of Opus Restaurant.

Emma Gray, Director of Marketing Services for Visit Birmingham, which managed Birmingham Food Fest, said: “Birmingham is fast becoming recognised as an international leader in cuisine – our inspirational chefs and world class range of restaurants, from Michelin stars to independent eateries, continue to attract more and more visitors who want to sample a flavour of the city’s unique food scene.

“Now one of the city’s annual highlights, Birmingham Food Fest offered visitors the opportunity to discover the vast spectrum of food available in the city, inspiring a new generation of food lovers with an innovative programme of events – whether it’s dining out at restaurant, visiting a fringe event or taking part in one of the many culinary workshops during the festival.

“Collaboration was at the heart of this year’s Birmingham Food Fest – we joined forces with the city’s restaurants, chefs and local businesses to host a second successful festival and provide a platform to showcase the very best of Birmingham’s food scene.”

The gastronomic celebration featured irresistible restaurant offers as part of Visit England’s national 20.12% campaign, and a mouth-watering line up of over 50 fringe events across the city. Highlights from the menu included food and wine matching from Birmingham Wine School, culinary themed walking tours, cocktail making classes at Bayleaf Restaurant and the Warwick Bar Fete, where visitors could get hands-on with interactive bread-making and wild food foraging workshops run by the Edible Eastside team.

As part of Birmingham Food Fest, Chicago foodie star Dirk Flanigan, Executive Chef of Henri and The Gage restaurants, was welcomed to the city to join Opus Restaurant’s David Colcombe, in the kitchen. The duo took part in a number of events during the week including the CBD Food Festival and the Culinary Crossroads dinner at Opus on the eve of the festival. The partnership follows on from Chef Colcombe’s recent visit to Chicago in April where he joined Chef Flanigan at his restaurants on the Magnificent Mile, as part of the Délice ‘Great Cities of the World’ programme.

David Colcombe, chef director at Opus Restaurant, said: “Being on the ground at the CBD Food Festival was a fantastic experience – people were extremely curious and passionate about high-quality food and drink. Many were keen to try several different dishes, but also wanted to learn more about the food itself which was incredibly refreshing for the participating venues.

“It has led directly to a number of new customers coming through our doors, which has certainly made it worthwhile for us to have participated. I hope the festival runs again next year.”

The second annual Birmingham Food Fest has helped to build on the city’s growing reputation as an outstanding culinary capital. Recently named in The New York Times’ ‘Must-See Destinations of 2012’ shortlist due to its culinary offering, Birmingham continues to gain international acclaim as a real food lovers’ haven.