Coventry Ambassadors are ready to begin meeting and greeting visitors to the city this week ahead of the first football fixtures of the London 2012 Olympic Games. 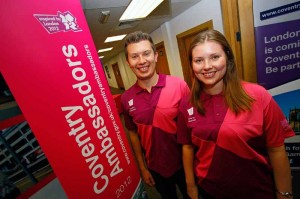 Over 300 volunteers have been put through their paces in a training programme designed and delivered by Coventry University to ensure they are equipped to create a great impression on the thousands of fans expected in the city.

The ambassadors are set to play a crucial role in providing information, assistance and a warm welcome to visitors, and will be stationed in key locations across Coventry, including at major transport hubs, public spaces, visitor hotspots and outside the host stadium itself.

Ivy Yang, a Master’s student in Human Resources Management at Coventry University, is one of the many ambassadors looking forward to donning her distinctive pink uniform and helping the city crowds.

Ivy, who is originally from Zhengzhou in China, said: “I’m really excited to be taking part in the Olympics as a Coventry Ambassador. I was in China when the last Games were held in Beijing, and it was very difficult to get involved as a volunteer. This programme seems very well organised. It’s also going to help towards my course, as I’ll be writing about my part in the ambassadors project for my dissertation.”

For one couple, their part in the Coventry Ambassadors initiative comes just a matter of weeks after they tied the knot. Christopher and Michelle McNally – who both work in the city – met over ten years ago when they were students at the Cardinal Wiseman secondary school in Coventry, and they married in May this year.

Christopher said: “It is fantastic to be a part of this once in a lifetime experience and to have the opportunity to give something back to the city. This is a very special year for Michelle and I, so being involved in the Olympic football here in Coventry has made it even more exceptional. We are crossing our fingers that we get to see the final at Wembley!”

Jane Whitehead, Head of Student Funding at Coventry University and a Coventry Ambassador, said: “As a Coventry Ambassador Team Leader I will play a key contributory role in making each visitor’s experience a positive and pleasant one – directing them to car parks, amenities and the Stadium. I am proud to represent the University in this partnership with Coventry City Council and other local bodies.”

The Coventry Ambassadors scheme is funded by Coventry City Council and managed by Coventry University in conjunction with both Voluntary Action Coventry and Coventry, Solihull and Warwickshire Sport.