Birmingham is gearing up to host the UCI BMX World Championships, which will take place at the National Indoor Arena (NIA) next week. 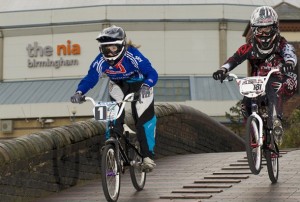 Tickets are still available for the Championships, which will take place from 24-27 May, showcasing the best in BMX, with over 20,000 visitors set to attend.

The event will host over 2,000 riders from across the world, including Team GB Olympic hopefuls Shanaze Reade and Liam Phillips who will be gunning for world titles in their last major outings before the Games. The Championships will be the final opportunity for elite athletes to secure points to count towards qualification to the London 2012 Olympics.

While tickets can be bought across the whole Championships, the organisers have packed most of the finals into two showcase nights of racing and entertainment. ‘Challenge’ class finals and elite time trials will be the focal point of the Friday evening, whilst Saturday night will see the Elite Championship finals, where the world’s best riders will race elbow to elbow for the honour of wearing the rainbow stripes of World Champion for the next 12 months.

The BMX Racing track at the NIA has been built from scratch in just one week leading up to the competition, replicating all the features of an outdoor BMX track but with capacity to seat an audience of over 4,000 spectators. Over 3,000 tonnes of locally-sourced limestone has been used to build the track, which has been constructed on top of 8,000 pallets.  It is also the first time that tarmac has been used for an indoor BMX track.

Director of Marketing Services for Visit Birmingham, Emma Gray, said: “The BMX World Championships is another example of a world-class international sporting event being held in Birmingham.

“As well as showcasing BMX ahead of the Olympics, the Championships will provide an opportunity for the event’s many visitors to sample everything that Birmingham has to offer.”

Phil Mead, Managing Director Arenas, of the NEC Group, added: “As one of the busiest, large-scale indoor sporting and entertainment venues in Europe, we are well prepared to host such a prestigious and large-scale event. The floor of the NIA has been transformed into a full scale, world class BMX track and now we are all anticipating the arrival of some of the world’s best BMX cyclists.

“The event will have a huge impact on the city as a whole, bringing over 20,000 visitors over the four days, and the NIA team is delighted to contribute towards what we are sure will be a hugely successful event.”

Almost 3,000 people participate in BMX in the UK, and there are around 70 BMX tracks in use. BMX in Birmingham was put firmly on the map earlier this year, with a new state-of-the-art BMX track built at Perry Park, just one of the legacies of bringing the event to the UK. Birmingham BMX club is now the largest in the UK with over 400 members in just one year since the opening of the Perry Park track.

To purchase your tickets, go to www.bmxworldchamps.com

The UCI BMX World Championships is the biggest annual prize in BMX racing with the world’s best riders chasing the right to wear the coveted rainbow stripes for the following 12 months. The event is also the last event in which nations can secure valuable qualification points as they strive to earn their place at the London Olympics in 2012. The event takes place at Birmingham’s NIA between 24th and 27th May 2012.

Visit Birmingham is the city’s official leisure tourism programme for Birmingham, part of Marketing Birmingham’s destination marketing strategy.  As one of the top visitor cities in the UK, attracting over 32 million visitors a year, Birmingham is a must-visit leisure destination for all.

The National Indoor Arena (NIA) is one of the busiest, large scale indoor sporting and entertainment venues in Europe. Since opening in 1991, it has welcomed visitors to over 30 different sports and an extensive variety of entertainment and music. Everything from Oasis, Coldplay, Sir Cliff Richard and Kings of Leon, to Disney on Ice and Cirque du Soleil.