“Why go to Venice…when you can go to Birmingham?” wins VisitEngland’s Travel Article of the Year

“Canals, culture and sparkly offices and restaurants… Birmingham has definite echoes of Italy’s dreamy tourist honeypot Venice.” That’s the verdict of a piece which was voted Travel Article of the Year at the VisitEngland Awards this week. 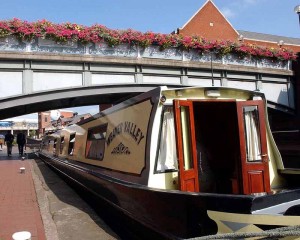 The article, “Why go to Venice….when you can go to Birmingham?” by Ian Belcher, was a result of Visit Birmingham’s work to promote the city, advising lovers to go to locations such as Birmingham Museum and Art Gallery and the Electric Cinema, as well as on an Away 2 Canal boat trip during a romantic long weekend.

The six-page article appeared in Hotel Best Western’s bi-annual Do Not Disturb magazine, which is placed in every one of the group’s 14,500 hotel bedrooms.

Writer Belcher said: “I was sent to investigate the potential for amour in the second city and found it exists in the extraordinary industrial history and recent dynamic regeneration of areas close to the centre.

“It’s there on the canals, in the Victorian galleries and in the energy of the streets around the Jewellery Quarter and Custard Factory. The city has fought hard to throw off a negative image and really is worth a fresh look. It provided one of the best long weekends I’ve had in a very long time.”

Belcher’s piece on Birmingham captured the imagination of the VisitEngland judges as it fought off competition from features on London, Cornwall, Hadrian’s Wall and the Peak District.

Emma Gray, Director of Marketing Services for Visit Birmingham, the city’s leisure tourism programme, said: “Birmingham is raising its game as a place to visit. Whether it’s couples looking for a romantic break or families seeking fun – the city is proud to have it all.

“With the city hosting the USA and Jamaican Olympic Track and Field teams ahead of the Games, the return of the Birmingham Food Fest after a successful inaugural year and a number of independent music festivals taking place, summer in Birmingham promises to be an exciting one.”

The success builds on a number of high-profile articles lauding Birmingham as a top visitor destination, including “36 Hours in Birmingham” which featured in The New York Times, focusing on the city’s heritage. The same newspaper also listed the city as number 19 in its “45 Places to Go in 2012” shortlist in January – the only English city outside of London to be selected.

Visitor numbers to Birmingham have risen by 13% over the last five years, from 29.1m to 32.8m, contributing to the city’s visitor economy worth £4.6bn.

The VisitEngland Awards for Excellence 2012 celebrate the best of English tourism. They promote healthy industry competition and high standards, helping to ensure England’s place as a world-class destination. www.enjoyengland.com/excellence