The British Small Animal Veterinary Association (BSAVA) World Congress, held in Birmingham for the 22nd successive occasion, this year attracted a record number of visitors, with more than 10,000 people converging on the city to promote excellence in veterinary practice through education and science. 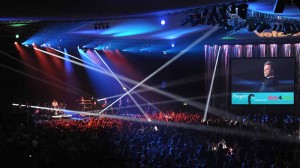 Between 11-15 April, Birmingham’s International Convention Centre (ICC) and National Indoor Arena (NIA) hosted over 5,000 vets, 2,000 vet nurses and 3,000 exhibitors from more than 70 nations, a 22 per cent increase on the previous high in 2011. The event’s packed social programme included comedian Greg Davies and chart-topping singer Olly Murs, whose sister is a veterinary nurse.

BSAVA President Andrew Ash believed that the 55th annual Congress was an unforgettable event to crown his year in office. Ash said: “I am incredibly proud to preside over such a truly world-class Congress for the entire small animal veterinary profession. It has surpassed all my expectations and broken all records.

“We have welcomed the World to Congress this year and I am honoured to have been part of a tremendous team who have worked alongside the WSAVA and FECAVA to make this happen.

“This was the largest small animal Congress ever, however we believe size isn’t everything and it is an honour to be part of the world veterinary community.” 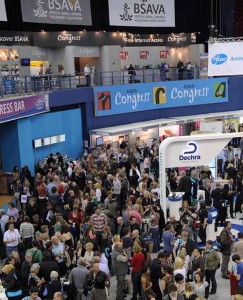 The Birmingham Convention Bureau (BCB), operated by Marketing Birmingham, estimates that the five-day congress will have generated more than £18 million to the regional economy through hotel stays, meals, entertainment and travel.

Ian Taylor, Commercial Director at Marketing Birmingham, the city’s strategic marketing partnership which operates BCB, said: “Hosting such an important event in the veterinary calendar for more than two decades truly cements the city’s position as a leading global conference destination. It underlines the hard work of our accommodation, entertainment and transport partners and the high quality experiences that they provide for organisers and delegates.

“This year’s attendance serves to demonstrate the city’s capacity to cater for events of all sizes.  We continue to enjoy a productive relationship with BSAVA and look forward to welcoming veterinary professionals back for their 23rd consecutive year here in 2013.”

The veterinary event was the first to be staged at the ICC when it opened in 1991. Catherine Newhall-Caiger, Business Development Director for the ICC, said: “We are extremely pleased that this year’s World Congress has been such a huge success for BSAVA and their delegates, and are very proud to have been part of such a prestigious event.

“It’s staggering to think that over the five days we staged over 300 sessions, the opening ceremony, the Taste of Britain reception, the congress banquet and the party night as well as a large scale exhibition!  The success of the Congress is a real testament to our people and the BSAVA team.

“I would like to thank everyone from the ICC, the NIA and BSAVA who worked tirelessly to make sure everyone who attended the congress experienced a truly world class service , and I look forward to working with BSAVA again for their next Congress in 2013.”