The New York saxophonist Tim Berne is playing in London on Wednesday and Thursday. Martin Longley interviewed him in a Brooklyn bar… 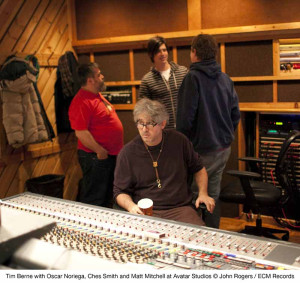 The New York saxophonist and composer Tim Berne harbours what must surely be a compulsive need to form fresh bands, and to give them new identities. It’s as if he latched onto the DJ/producer fetish for juggling numerous aliases, long before such a practice became commonplace. The key difference is that Berne usually ensures that his own name is visibly attached to each new playing entity.

Whilst still embodying the spirit of youth, technically Berne is now a veteran of the New York scene, having returned home in 1974 (following his studies) and effectively becoming reedsman Julius Hemphill’s disciple. Berne’s recorded career began on his own label (unusual for a jazzman in 1979), but his early reputation was securely established in the 1980s with a short gush on Columbia Records and a substantial run on JMT. Who can possibly enumerate all of Berne’s bands? The chief crews, the most influential and prolific, have been bloodcount and Paraphrase. There have also been key combos co-led with other players, such as Miniature, Big Satan and Buffalo Collision.

For his latest impressively evocative album, Berne has forged a strange loyalty to his latest composing and performing platform. The Snakeoil foursome is now his primary vehicle, and they’ve only recently released their debut disc on the revered German label ECM. Even though Berne has already appeared on two ECM albums (titles by guitarist David Torn and bassman Michael Formanek), this is his first recording for the label under his own leadership. The eponymously-titled Snakeoil disc will also mark Berne’s first studio statement for eight years.

Snakeoil also happens to be an all-acoustic experience, with Berne joined by Oscar Noriega (clarinets), Matt Mitchell (piano), and Ches Smith (percussion). The leader concentrates on the alto saxophone, Mitchell is not allowed to touch his laptop, and Smith spends much of his time creating rumbling soundscapes on the tympani drums.

Very close to home, and his rehearsal studio, I met up with Berne in the Flatbush Farm bar in Brooklyn. This woolly-hatted tallster dude began to reflect on the unique properties of his Snakeoil formula. “The band, when we started it, half the music was newish and half was things that I wanted to play with other bands that had kinda got rejected. I took all this stuff, and said, this is the band for this music! Over the two years before we did the record, it evolved quite a bit, and I started writing a lot more. This band really likes to rehearse, so it’s kind of an opportunity for composing heavily. I really wanted to make a studio record. I put a lot of thought into this. Studio records are more like the musical version of a movie. The quality can be really high, you really get into detail, and it’s a very controlled situation.”

Folks might wonder whether the famed ECM owner and audio auteur Manfred Eicher might have deliberately chosen Berne’s acoustic combo for this project, to uphold his alleged production values of luminescent chamber contemplation. This seems not to be the case. “Eicher’s very improvisational,” says Berne. “I don’t think he wants to hear the music in advance, I think he likes to go in there cold. He likes to react in the moment.”

Berne views this entire project as a collaboration. “I actually wanted a producer, I wanted to be challenged. I wanted the input of someone who works with composed music. There are certain details with written music that I don’t always get to, I’m kinda lazy about. He was really on it, really paying attention. He had ideas regarding dynamics, instrumental combinations. Almost every idea he had was good. I wanted his input. I didn’t really want to be the sole arbiter of taste.”

There was only one Eicher suggestion that didn’t succeed. “There was something he liked, but it was something that happened improvisationally, and those are hard things to recreate.”

The sessions took place at the Avatar studios in Manhattan’s Hell’s Kitchen, a preferred location for ECM recordings in NYC. “Eicher let Matt go to Steinway, to pick out a piano. That’s quite a luxury. Nobody else does that. He really cares, and he really knows his pianos. Plus, there was a piano tuner at the session. That’s all very unusual.”

“He’s as stubborn as I am,” Berne smiles, contemplating the Eicher mystique. “He’s a trained musician, and a trained engineer. For him, why would he bother doing anything if he’s not going to have any influence? Otherwise, it would be a bore. He let me choose the material, and we’re talking about 20% of it that really benefited from his input. On the Michael Formanek record, I saw it again. It wasn’t an aberration. We’re so used to going into the studio with these people who aren’t really producers, who don’t say anything, that when someone actually does have a real opinion, and doesn’t couch it in diplomatic talk, it’s shocking, man.”

Following on from Michael Formanek’s 2010 album, The Rub And Spare Change, his band have been into the studio again, to lay down its sequel with Eicher producing. “The first day of the Formanek recording, it was a bit tense,” Berne recalls. “But then the second day went really well. By the end, we all realised, these are really good ideas. Initially, you want to be a little bit defencive. We’re so vulnerable and insecure, in a way, but once you get past that, and that whole thing of being under the studio microscope, it was nice to have someone who cared enough to have influence. Both experiences were really good, but they weren’t without tension and stress. But that’s normal.”

It’s tempting to term the new album as chamber jazz, with touches of moderne classical and free improvisation. Berne and Noriega are walking along spiky ground, with the latter’s choice of clarinet and bass clarinet lending an assured coolness to the convoluted riff procedures. Berne himself is pointedly angular, up at the high end, needling with a sharp eye. Smith pays particular attention to percussive minutiae, and Mitchell is the king of delicate dapple. This doesn’t, however, inhibit the recurrence of tensed and dense passages, where bullish force is still possible along with the dainty footwork.

“I’m not sure what chamber music means,” muses Berne. “But it’s got the intimacy and the delicacy, dynamically. I’m hesitant to use the word, because usually it means quiet, and maybe not as aggressive, and this stuff’s aggressive at times, and it’s not always quiet, but it’s got the intimacy. There’s a lot of written music this time, that demands a lot of precision. A lot of it goes through the piano. In a way, Matt’s the centre of the whole thing. It pivots around what he’s doing, and what I’ve written for him. There’s a lot of percussion. Ches is playing tympani, and that’s also very deliberate.”

This is part of Berne’s new strategy, to be less fanatically controlling, to allow increased improvisational expression from his sidemen. He now confesses that he’s become less obsessed with hammering down every fine detail of an arrangement.

There are, of course, a few diversions from Snakeoil businesssss. Berne has just recorded with Ches Smith’s These Arches and the French guitarist Marc Ducret’s large ensemble. Our saxophonist predicts that there will be a new band soon that will feature Ducret in its ranks.

Of course, Berne has long been known as a fiercely independent label owner himself, operating Screwgun Records since 1996. It’s not quite as active as it once was: “Everybody steals records now, you can’t sell them. I’m selling half as many, so I can’t afford to make studio records. Live records are cheaper. It’s hanging in there. The mail order thing works for me. I have a lot of good ideas, but I don’t want to spend all my time on the computer. At the moment, I’m excited about playing and writing. This is an opportunity to have the luxury of someone else doing that other work for me.”

Snakeoil play at the Vortex in London on the 14th and 15th of March.