The electronic age has certainly had a big impact on the traditional high street and none more so than in Coventry. 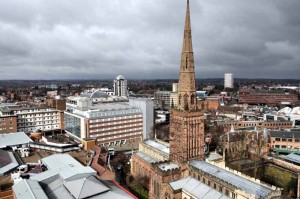 A stroll down Coventry High Street in 2002 would involve walking past iconic stores such as Our Price, Woolworths, TJ Hughes, Adams, Virgin Records and Peacocks, however the decline in high street spending has resulted in these large stores closing. Findings by Verdict Research show that the number of UK town centre stores fell by almost 15,000 between 2000 and 2009 and estimate a further 10,000 losses over the next few years.

Verdict Research also found that town centre sales dropped by over 7% from 2000 to 2011 and predict sales to plummet by a further 2.4% by 2014. During the same period we have witnessed year on year growth of the number of transactions being conducted using the internet and ecommerce. This is partly due to the developments undertaken by the Banks to ensure that online transactions are safe and secure which has lead to increased levels of consumer confidence for e-commerce purchases. Similarly, the surge in technological advancement with the introduction of smart phones and tablet devices, together with a significant increase in internet access speeds, more consumers are window shopping from the comfort of their own home.

Whilst the recent economic recession has impacted significantly on the retail market, a long term structural shift in the way we shop has been occurring, as a result of changes in consumer behaviour, technological advances and the emergence and growth of new retail development schemes.

Despite the move away from shopping centres to online shopping, retail development remains one of the key ways of regenerating city centres. Over the past decade, regeneration projects around the city centre have focused on areas such as Broadgate, the Lower Precinct, and the Burges. When Cranfield first began business in 2002, the Lower Precinct underwent extensive refurbishment and redevelopment to modernise the area and bring shoppers back to the centre. A few years later in 2007 the iconic blue Ikea building was erected next to the Skydome which attracted more consumers back to the Coventry area. Redevelopment in the city continues as the Olympic Games approach, with a £7million regeneration project well underway in the Broadgate area, which is being further pedestrianised to attract bigger retail and other businesses to the city. The £50m Bishop Street development is also another feature that aims to get Coventry back on the map retail-wise with its 130,000 sq. feet state of the art complex.

Tony Mitchell, managing director of Cranfield Business Recovery who founded the company in 2002, said: “We have had a successful ten years as Coventry’s leading business recovery specialists; I have been joined by my co-directors Patrick Murtagh and Brett Barton and also moved into our prestigious Coventry City centre offices. We are proud to be located in a city that has had a vibrant history and which now has ambitious plans for its future. However, we mustn’t be complacent.  The retail sector in particular continues to face tough times ahead with the changes in shopping habits as well as the continuing difficult economic climate. The focus for this sector should be on ensuring their businesses are solid enough to meet the changing demands and innovative enough to be competitive both online and in the high street.”

Cranfield was established to provide local corporate recovery and personal insolvency advice and assistance to those living and working in the Coventry and Warwickshire area.

Tony added: “As Coventry’s leading insolvency practice, our aim has always been that we are very much part of the business community in the region, and especially in the city of Coventry. We understand the key issues that the region’s businesses face, and the past 10 years has given us plenty of experience of dealing with a wide variety of situations.  We like to think that Coventry’s businesses come to Cranfield when they need advice and guidance to stay on track, and more so in times of economic difficulty and changing market forces, when they need a practice with the level of expertise we have acquired working closely in the Coventry business community.”