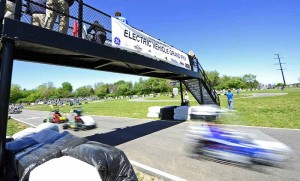 As Jenson Button attempts to make it two wins in a row at this weekend’s Malaysian Grand Prix, motorsport engineering students at Coventry University are gearing up for a very different kind of racing challenge.

A team of undergraduates is building a battery-powered go-kart to compete in the Indianapolis Motor Speedway’s prestigious Electric Vehicle Grand Prix (evGrandPrix) as part of the build-up to America’s most famous race, the Indy 500.

The students are hoping to go one better than last year, when the team – which included Paul and Andrew – raced to a podium position at the famous ‘Brickyard’ to beat over 30 universities from across America.

In a bid to gain an early edge in this year’s competition, the team has linked up with Coventry-based EV battery manufacturer Evida, who are helping the students develop the emission-free system that will power the kart.

First run in 2010, the evGrandPrix encourages students to design, build and race the fastest and most energy-efficient electric kart over 100 laps. The event is designed to inspire the next generation of engineers to develop racing machines with an environmental conscience. 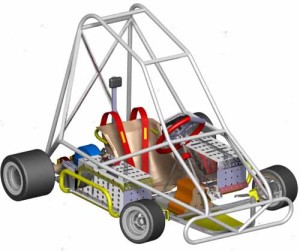 A render of the kart that will be raced by Coventry University students in the 2012 evGrandPrix.

Andrew Cook, who is in his final year of studying Motorsport Engineering at Coventry University, said: “We’re really excited to be returning to Indianapolis to race in the evGrandPrix in 2012. Having finished third last year, we’ve got unfinished business – this time we’re shooting for the top step of the podium.

“It’s great that young engineers are being given this chance to show their skill with low carbon technologies in motorsport, and it’s also a testament to the talent and reputation of engineering students in the UK that we’re one of the few countries invited to compete in this event against America’s best.”

The evGrandPrix is being organised by Purdue University, Indiana, in conjunction with the Indianapolis Motor Speedway, and will take place on May 12th 2012.