Birmingham’s council leader has called his recent meeting with the head of the BBC ‘promising’. Dave Woodhall begs to differ 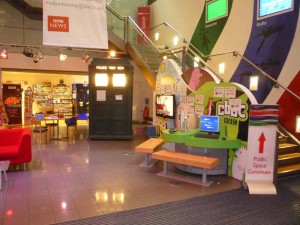 Further evidence that Birmingham city council leader Mike Whitby doesn’t inhabit the same planet as the rest of us comes following news of his recent meeting with BBC Director General Mark Thompson. Cllr Whitby hailed this as “a clear indication of the BBC’s commitment to a sustainable future in Birmingham,” despite the Corporation continuing to give every indication that they intend to reduce their presence in the city to having the weather forecast underneath a picture of Shefali on a piece of A4 stuck on the window of their Mailbox offices, next to a ‘To Let’ sign.

During this meeting the BBC agreed to several proposals, and it is these which Cllr Whitby enthuses about. They mean that the Corporation will pilot an apprenticeship scheme in conjunction with educational establishments and also work with the city’s private media sector to develop future technologies and digital content. The BBC will also support the development and testing of new content from Birmingham content producers, and release more Birmingham-related digital archives for the opening of the Library of Birmingham.

Cllr Whitby views this “ongoing dialogue” with the BBC as “pointing in a very promising direction”. According to the council leader, both the BBC and the city are powerful institutions worldwide and working together is natural. He adds that “the creative sector is critical to our economy and its future success will be critical to providing much needed work for local people, as well as making Birmingham an exciting place to live, work and visit.” Which is, of course, accurate. And the recent meeting would be commended, were it not for the fact that the BBC is currently doing its best to deny all knowledge of Birmingham and the Midlands – an area which currently receives 3.6% of the Corporation’s annual expenditure of £3.76 billion in England despite being home to over 19% of the population.

In December the BBC announced that they would no longer be making factual programmes in Birmingham, and 150 jobs would either be lost or moved from the Mailbox, a situation which Cllr Whitby described as appalling. What he said about these plans during his meeting with Mark Thompson was not revealed. Instead, the leader of Birmingham city council was happy with the promise of training opportunities and future co-operation with local businesses in return for the continued and systematic downgrading of Birmingham as a broadcast centre. His counterpart in Salford, new home of the BBC in the north, is presumably a harder man to please.

Thompson, for his part, said of the discussions: “Working together in successful partnerships is critical to all of our futures.” I’m sure he regards this partnership as being particularly successful. The city of Birmingham, and particularly the 150 BBC employees affected plus their families, might beg to differ. From our civic leaders, we all deserve better.

There’s a discussion on the subject of the BBC’s commitment to Birmingham on the ReStirred Forum.