Alan Clawley asks; “How wise then was it for the Council to borrow money on a public library, a statutory service that would produce little or no income stream…”

Borrowing was for many a last resort when no other option was available. Agricultural communities created ‘credit unions’ to borrow the money to buy essential seed for next year’s crop in the hope that the weather would be kind enough to produce the cash to repay it. Even today, members of community-based credit unions are asked (by law) to confirm that they are taking out a loan for ‘provident and productive purposes’ – in reality anything but gambling on the horses.

In a developed consumer society like ours, borrowing has become a way in which we can have what we want sooner rather than later. Loans normally have to be paid back with interest over the agreed term of the loan with penalties for defaulting – but it seems if you can’t or won’t pay because you don’t have the money you will be let off and the lender will write off the loan, or the property that you bought will be taken off you, or you can declare yourself bankrupt. Secured loans are only really recoverable when the property that has been bought with the loan is continually increasing in value, as houses have been doing until recently.

How wise then was it for the Council to borrow money on a public library, a statutory service that would produce little or no income stream with which it could repay the loan and which is unlikely to appreciate in market value. How will the loan be repaid and what will happen if the Council defaults? 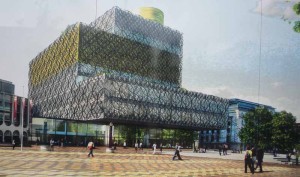 The truth is that the City Council can borrow money easily because lenders can be absolutely sure that it will never go out of business and default on its loans. That is why governments are given 3-star credit rating by the banking community. The Council has an income from Council Taxes that is guaranteed by law and underwritten by central government. It has always been implicitly understood that governments could and would never go bankrupt and default on their debts – however great. They have been seen as the most secure form of investment around. All governments have to do to balance their books is to charge the people higher taxes or cut public services. Only central government can reign in the total amount a city council can borrow by making it prove that the borrowing is ‘Prudential’, a term invented by Mr ‘Prudence’ Brown when he was Chancellor in the Labour Government.

But in recent months the world has faced the real possibility of the Greek Government going bankrupt and being unable either to repay its loans or to raise taxes by which to repay them. It is widely expected that the defaulting loans will have to be underwritten by the International Monetary Fund or the European Bank in return for drastic cuts in government spending.

Councillor Whitby could not have had such a fearful possibility in mind when he committed the city council to the ‘Prudential Borrowing’ of £193 million to build the new library. The only income stream that he can rely on to repay the loan as well as the annual charge of £7.5 million over 40 years (amounting to £590 million) is the Council Tax. All other sources of income, such as any hoped-for Business Rates from new tenants re-locating in the redeveloped Paradise Circus, expanding income from visitors and tourists or top sports events, is purely wishful thinking, especially when the commercial property market and the economy as a whole is extremely depressed and is likely to remain so for at least another decade. Even the Council’s desperate-looking efforts to attract new business into the city centre through an Enterprise Zone may prove fruitless if businesses are excused Business Rates for the first five years. The idea that government will just increase its grants to make up the difference seem over-optimistic.

The Council officer most closely aligned with the Paradise Circus project, Clive Dutton, left the council to take up an Olympic Legacy post with a London Borough, but he left behind one of his famous sayings uttered for the benefit of the Council Cabinet in 2007 on the eve of the worst property crash since the end of the Second World War. He said, ‘…[there is] an insatiable appetite among private sector developers to buy sites in the city centre. Please trust me that we know what we are doing’. (Birmingham Post 3 November). Unfortunately future Council Tax payers of Birmingham may pay a high price for his advice.