Olafur Darri Olafsson in The Heart of Robin Hood

Cheeky like Errol Flynn; a bit chubby and all middle class like Richard Green off the telly 45 years ago; or how about Sean Connery as the aging crusader returning to Sherwood Forest in the film Robin and Marion (my favourite)? Or how about even clunky Kevin Postner delivering his lines like a robot?

Everyone has a favourite.  Because everyone loves Robin Hood.

The Royal Shakespeare Company comes up with a new kind of hero though: boorish, a thug, quick with a vicious knife and not too likely to allow ladies into his forest or too likely to give to the poor once he’s stolen from the rich.

Up comes Marion, disguised for many reasons as Martin of the Sherwood, to give him a run for his green tights..she’s not all girly and submissive but a tough cookie who wants to take charge and give Robin a challenge when she goes robbing the rich. 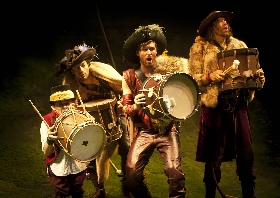 This is the Royal Shakespeare Company’s take on the myth on its main stage in Stratford.  And it is a 100 proof winner- a physical performance with actors swooping down a 40 foot ramp, jumping into deep puddles, walking into holes and climbing and twisting up and down  vertical ropes to get down from the oak branches that sweep above the stage.

Iris Roberts is a tough shrewd Marion who gives Robin and his bunch of hardmen a hard time. James McArdle is a sinewy hard nut to crack as a naughty boy with a soft heart and Prince John (Martin Hutson) is truly bad and a bit of a masochistic- this delightfully evil prince reminded me of the Malcom Tucker role from the tv series In The Thick Of It.

Five stars though to a new character served up in this iconic myth. He is Marion’s fat servant Pierre (played by Olafur Darri Olafsson) who is both the narrator and the butt of all the jokes. This Icelandic actor delivers a truly Shakespearean comic character- half a Falstaff and half a Bottom in an outsize laugh-aloud campy comic role .

His sword dual itself is worth the ticket.

Set design is as good as it gets: all green and oaky canopy. And the script by David Farr stays on the right side of becoming a good/bad pantomime.

Icelandic director Gisli Orn Gardarsson gets its right for a Christmas show which has its gory moments but the kids surrounding me were right into it- as were the adults.

This is a production that gives you a seasonal lift and, of course and inevitably , a lovely ending.

A real winner, this one.