Hit West End musical Dreamboats and Petticoats is bringing the rock ‘n’ roll era back to the Belgrade Theatre’s Main Stage from Mon 14 to Sat 19 November. 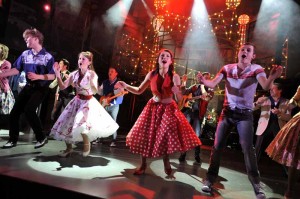 Inspired by the multi-million selling Dreamboats and Petticoats albums, this West End musical features some of the classic tracks from musical giants such as Roy Orbison, The Shadows, Eddie Cochran and Billy Fury including Let’s Dance, Shaking All Over, Bobby’s Girl, Only Sixteen, Runaround Sue, C’mon Everybody, Let’s Twist Again and many more.

Dreamboats and Petticoats takes audiences back to 1961 – emotions are running high as young musicians Norman and Bobby compete to win a national song writing competition and, more importantly, the attention of the gorgeous Sue. But when Bobby discovers that shy Laura is no slouch on the piano, love and rock ‘n’ roll fame beckons.

Written by Laurence Marks and Maurice Gran, the team behind classic TV shows such as Goodnight Sweetheart, Birds of a Feather, The New Statesmen and Shine on Harvey Moon, this feel-good production will take audiences back to a time when each passing week brought another classic track.

Dreamboats and Petticoats premiered in February 2009 at the Churchill Theatre in Bromley to rave critical reviews and widespread audience acclaim. Having sold out its return there in November 2009, the national tour has been extended throughout 2011.