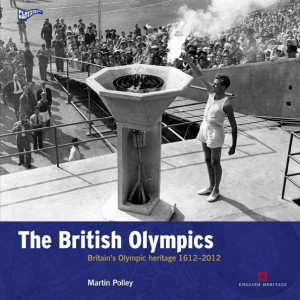 As London prepares to be the first city to stage the modern Olympic games three times, a new book The British Olympics – Britain’s Olympic Heritage 1612-2012 by Martin Polley, senior lecturer in sport at the University of Southampton, reveals Britain’s centuries old association with the Olympic Games.

Never mind the 1948, or even the 1908, the first recorded Olympic Games in Britain took place as long ago as 1612, in a field near the Cotswolds town of Chipping Campden, the beginning of a long and fascinating relationship between the British and all things Olympian.

As history records, the Olympic Games originated in ancient Greece nearly 3,000 years ago, dying out around 393 AD, and were triumphantly reborn in 1896, in the Greek capital of Athens. Rather less well known is how, during the intervening centuries, an assortment of British writers, romantics, sportsmen and visionaries helped to nurture that revival. Indeed our nation’s fascination with all things Olympian has played a pivotal role in shaping the Olympic Games we know today.

As Martin Polley recounts in this, the 17th book in English Heritage’s Played in Britain series,  here are ten things you might not know about Britain’s surprisingly rich Olympic heritage:

1. The first published use of the word ‘Olympian’ in the English language dates from around 1590. Its author? William Shakespeare.

2. The first Games of the post-classical era to adopt the formal title ‘Olimpick’ took place in a field close to the Cotswolds village of Chipping Campden in 1612. Established by a fun-loving royalist, Robert Dover, the Cotswold Olimpicks still take place on the same site every year just after the late May Bank Holiday.

4. It was a party of three English gentlemen, led by 27-year old scholar Richard Chandler, who rediscovered and identified the lost site of Olympia in around June 1766.

5. A typical 18th Century ‘Olympick Games’ staged in rural England included the popular event of catching hold of a pig’s tail smeared in grease! In the early 19th century equestrian sports dominated. One promoter of such Olympian arts was Britain’s first black circus master, Pablo Fanque, best remembered for taking his Circus Royal to Rochdale in 1843, where it performed ‘For the Benefit of Mr Kite’ – as immortalised on the Beatles’ Sgt Pepper’s Lonely Hearts Club Band album.

6. The French founder of the modern Olympics, Baron Pierre de Coubertin, was an avowed anglophile and devotee of the Rugby School headmaster Thomas Arnold. De Coubertin borrowed many ideas from the British, but William Penny Brookes, the Shropshire doctor who originated the Wenlock Olympian Games and whom de Coubertin visited in 1890, chiefly inspired him. The Wenlock Olympian Games are still held each July.

7. The modern Olympic tradition of awarding medals goes back not to ancient Greece but to the Wenlock Olympian Games and the Liverpool Athletics Festivals of the mid-19th century, while the now accepted hierarchy of gold, silver and bronze was first introduced at the London Olympics in 1908.

8. The modern day marathon distance of 26 miles and 385 yards was not, as is often stated, established in 1908 to suit the demands of the royal family, but arrived at purely by chance because of a number of last minute changes to the start and finish of that year’s route.

9. The modern day Paralympics originated in post-war Britain. They were the brainchild of a German refugee, Dr Ludwig Guttmann, working at Stoke Mandeville Hospital in Buckinghamshire during the 1940s.

10. When London trumped Paris for the right to stage the 2012 Games it was the first time that a British city had ever triumphed in a formal bidding process. In both 1908 and 1948 London stepped in to assist the International Olympic Committee when all other options were ruled out.

Thus the 2012 Games represent the culmination of over 400 years of British enthusiasm for the Olympics; an attachment that has left in its wake a trail of fascinating stories, characters, sites, buildings and artefacts.

Profusely illustrated with archive images, specially commissioned contemporary photographs and detailed mapping, The British Olympics charts a fascinating tale and is a vital and entertaining source for anyone interested in the Games, in sport and in Britain’s wider cultural history.

You can read an abridged extract here