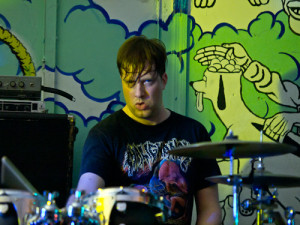 This gig was originally intended to reflect the line-up of the Electric Fruit trio disc on Thirsty Ear, who were the latest label curators for two weeks at The Stone. Unfortunately, the trumpeter Peter Evans was forced to cancel his appearance. This situation did have its advantages, though. It allowed an opportunity to catch a stripped-down duet between the other members, guitarist Mary Halvorson and drummer Weasel Walter. Perhaps it was inevitable that the improvisations would take a rockier turn, given that such a vocabulary is a large part of Halvorson’s method, and certainly a foundation for Walter’s attack.

As with the album, the pair chose (or were mutually compelled) to form shorter pieces than would often be the case for improvisers. This had the effect of framing their outbursts, sometimes lending them an increased strength. Walter tended to be dominant in terms of volume, as Halvorson is not one to crank up her amplifier to hardcore levels. Aware of this, he frequently dampened his skins with towels, muffling into a pattering, scampering state. Halvorson hovered between jazzy tonalities and harsher rock splintering, inventing riffs and tuneful circular phrases on the hoof (although the trio had already been moving towards the incorporation of half-prepared melody frameworks). Walter kept up an almost constant tumble and clatter of muted strikes, heard at his more sensitive extreme. His woody articulacy is descended from that of the old-school detail-specialists from England, players such as Tony Oxley, Roger Turner and Paul Lovens. Hesitation was completely absent. This pair have the advantage of a continuing rapport, without losing any freshness through over-familiarity.

Trans Am/The Psychic Paramount
Union Pool
The Psychic Paramount could be viewed as a.) the perfect opener for Trans Am, or b.) an unwise choice given their trio powerdrive proclivities, which made them almost too similar to the headlining band. This New York combo prepared the sold out crowd for what was to come: a Black Sabbath disco followed by the cranking of their immense dry ice machine. The Union Pool’s relatively small back room was soon filled with the most ludicrous amount of billowing clouds possible. I’ve never ever, ever, ever witnessed such a density. One girl draped her entire scarf over her head, another waved palms furiously, and yet another vainly attempted to puff away the fumes. Fat chance. One couple decided to leave the Williamsburg building. Even the menfolk were weeping. Further hazards arrived when drums (Jeff Conaway), bass (Ben Armstrong) and guitar (Drew St. Ivany) all hit the opening strike with absolute simultaneity, like a physical blow to the collective body mass. Weaker hearts would have burst. And then there was the further stress placed upon the eardrums…

The Psychic Paramount sound is very direct, almost primitively eviscerating in its intent. They operate a huge wall of riffing, axed up into hard-edged blocks of staccato ram-rodding. The guitar sometimes sounded like a keyboard, but it’s reasonably certain that the trio had no such device on stage. Triggered samples frequently transformed string sounds into sheer slabs of electro-tone. The band might only be desiring a monomaniac nature, but with bare white spotlights shining through the mist, limning vague shapes of these riff-gods, the Paramount threesome triumphantly achieved their single-minded aim. As a bonus, they made the audience smile, cough, bang their heads and leave the room. That’s quite an impressive mixture of responses.

Afterwards, Trans Am appeared almost conventional, in terms of their stage presentation. Their own tactic was to rely on the sheer substance of their dynamic delivery, in an almost old school fashion. Of course, as the decades roll by, Trans Am are now entering the road-worn pantheon of rocking veterans. Originating out of Bethesda, Maryland, they are nevertheless associated with the Chicago sound of the Thrill Jockey label. They are equally indebted to truckin’ rock and bleeping electro, half hard, half kitsch. Trans Am seem to accept the category of ‘post rock’, but their songs swirl with more humour than that style usually entertains. Plus, they have a preference for vocals (even if heavily vocodered) that is also somewhat alien to the post rock form.

This was the second of two nights at Union Pool, the set devoted to the regurgitation of Trans Am’s 1999 album Futureworld. Back then, adopting a 1980s sound-palette was a more radical act than it is nowadays. The principal instruments of Nathan Means, Philip Manley and Sebastian Thomson are keyboards, bass and drums, although there is much exchanging of roles, particularly between the first two players. Means can switch to bass or guitar, Manley frequently gives up bass for lead guitar, or occasional keyboards. Sometimes, Thomson shuns kit for synth-drums. The songs divided between instrumental and vocal, stretched out to greater length and bolstered by extended encore bonus tracks from the combo’s general repertoire. At no point did sluggishness intervene, with the Trans Am sound motoring purposefully through a set that was just right in length. Neither too brief, nor too rambling. They were concise, cutting, jerkily strutting, and in no need of any theatrics.

Shinji Masuko/Man Forever/Soft Circle
The Knitting Factory
Drums dominated this multi-combo evening, but guitars also staked out their own corner. Soft Circle opened, with percussion and electronics, stuttering dense textures and rhythms. Then, Man Forever played at The Knit for the second time in two weeks, using a single drum as a heartbeat. Two sticksmen sat either side of this centrally-placed snare, recalling the set-up for Steve Reich’s “Drumming”. A similarly insistent repetition formed the spine for an ongoing throb, with guitars meshing into a riff-wall, feedback bass humming underground. Next up, Boredoms guitarist Shinji Masuko reined in the sonic levels, shocking with a metallically minimalist soundscape, partnered by a similarly inclined bassist. Their approach required a sudden concentration on space and tonal textures, a leap back from the high volume abyss. This was a radically different musical zone, but still in keeping with the mood of the night. Another facet of sparseness, quietened into a silver shimmer.

Mary Halvorson/Jessica Pavone
The Stone
The Thirsty Ear label curatorship continued at The Stone. This was a CD release show for Departure Of Reason, but due to a manufacturing delay the object itself wasn’t going to be available for another month. Nevertheless, this absence didn’t impair the quality of the night’s music, lending an added sneak preview status to the proceedings. Halvorson and viola player Jessica Pavone elected to perform the record in its entirety, establishing an intimate recital atmosphere for a sometimes abrasively intimate set of songs. For even if only a clutch of their pieces feature vocals, even the instrumental majority sound like they have been penned to prompt imaginary couplets to spring into the listener’s mind. Each tightly constructed ditty tended to circulate around a very direct melody, simply stated but elaborated by changing texture or shifted timing. Both players were working closely with conjoined lines, then maybe one would trigger a sudden rush of fuzz or distortion, enforcing rock toughness, but still at low chamber volume. All the more exciting. Often, the works were reminiscent of Captain Beefheart’s instrumental miniatures, that are dotted periodically about his catalogue, usually with a south-of-the-border avant outsider folksiness. The pair’s compositions are usually prepared individually, subsequently subject to influences from the other duo member once rehearsal is underway. Even though the structure might be rocky, the melodies might be folksy and the sonic palette experimental in nature, the end-concoction isn’t really completely any of these forms. That’s one of the pleasures of the Halvorson/Pavone sound. One of the most striking illustrations of their toying with timing and repetition was “The Object Of Tuesday”, with its stuttering words and cumulative riffing. The rock’n’roll form was digested in a silent, seated, concentrated fashion, and the album sequence demanded careful attention throughout, each song refusing to overstay its welcome.

Alex Ward/Tim Dahl/Weasel Walter
Death By Audio
The English improviser Alex Ward started very young, participating in Derek Bailey’s Company seasons, and concentrating on clarinet. He’s still a relative youngster, and has secretively extended his armoury to include the electric guitar. This began in 2000, due principally to the encouragement of percussionist Steve Noble. Two days before this gig at Death By Audio, Ward had offered a free admission set at the Downtown Music Gallery in Chinatown, with fellow Englishman, the bassist Dominic Lash. It was a completely acoustic session, sensitively dancing into the ears. With this trio formation, Ward must have felt like an extreme contrast, a chance make those same ‘drums bleed. Lash was in the audience, and both players were nearing the end of their NYC stay. Choosing to play with electric bassist Tim Dahl and fearsome sticksman Weasel Walter is making a definite stylistic proposal, and Ward’s guitar was amplified to fitting levels. It was something of a shock to witness this unfamiliar aspect of his playing, an intensified form of noise-rock improvisation.

The venue was completely appropriate. This warehouse-style joint lies very close to the Williamsburg waterfront in Brooklyn. It’s a shell that harbours smoking, its walls covered in comix art tableaux. It has two beaten-up johns and operates a makeshift tabletop ‘bar’ that serves cheap beer’n’wine. A flashy new bar has recently opened up across the street, so they’d better watch out that they don’t get bulldozed for condos. Maybe this is why they’ve repaired the gaping holes in the chipboard ceiling. Weasel Walter appeared to have organised the evening, inviting out some old West Cost buddies from Los Angeles and beyond. The night opened with what might be termed abrasive fusion from drummer Danny Sher’s trio. Like Allan Holdsworth, born into punk. It concluded with mainline thrashers 400 Blows and the highly incongruous Fancy Space People, garbed exactly like a British glam rock ensemble, acting like a tribute band, but playing original material. Their wall of guitars, bleeping synths and falsetto chorusing came on like an incestuous bedding of Hawkwind, Sweet and The Glitter Band.

Before this came Ward/Dahl/Walter, though, taking the second place in the running order. This was a combination so powerful that the optimum state for absorbing improvisation was attained in the listener. I have a theory that the best freedom-in-music involves a complete clenching of the body, a massive tension that’s the result of complete unpredictability. There’s a sense that absolutely anything can happen, and a perpetual feeling of surprise once it does. This they achieved. With surplus excess. All of the music on this evening was excruciatingly loud. I never wear earplugs. Walter gestured the first explosion to an end. It looked like he was asking the guitarists to turn down. Dahl’s sound is almost complete fuzz distortion, but retaining its percussive edge. Ward was strafing and picking, with angular metallic serrations. I’ve experienced many Walter gigs, but most of them operating out of a free jazz foundation. This was his insensitive thrash-rock side, and the aggression was magnified, the hits at their most savage, but still with an extensive amount of detail in their jackhammer spray. No towels were used for skin-dampening in this performance. The first few pieces revolved around spiralling density, with a suffocating spillage of constant hyperactivity. Then, the trio began to break up the flow, initiating curt stutters, intuitively matching each other’s simultaneous punctuation points. Walter began physically punching his cymbals, lashing with a complete attention to mayhem. Ward certainly doesn’t look the part of a dangerous metal assassin, but he could match any of them in the field of battle. Dahl is one of the most extreme bassists in the land, his fuzz descended punkily from that of Soft Machine’s Hugh Hopper. All air was being sucked out of the lungs, as the collective ribcage tightened in fear.

The Psychic Paramount play at The Nightmare Before Xmas, Butlins Holiday Centre, Minehead, on the 10th of December, 2011…