Dave Woodhall was in the audience when the Beat made their triumphal return to Birmingham. 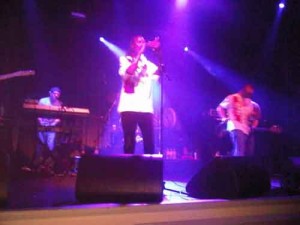 Birmingham Town Hall is many wonderful things, but a rock venue it ain’t. I’ve never seen a gig there when the band has really grabbed the audience in the way that separates the great from the good, so were the Beat up to the task?

They certainly had to be on top form just to be the best band of the night, as the Selector put in a fine support performance.  Starting off with a few of their lesser known numbers and some tracks off the new album Made in Britain, of which My England (renamed Our England) was the pick of the bunch, Pauline Black cavorted round the stage like it was still 1980. She’s a star.

A cover of the original Ethiopians classic Train to Skaville led into a finale of the Selector’s greatest hits – Missing Words, On My Radio, Too Much Pressure. Warming up the audience is one thing, but the Selector had thrown down a challenge that was going to be hard to match.

The signs weren’t too good at the start as the Beat launch into their regular opener Whine & Grine. The venue seemed less full than it had at the end of the Selector’s set – obviously the bar was still doing good business, but gradually everyone made their way back and the fun could really start. Too Nice to Talk To and Click Click get everyone moving, Rough Rider comes complete with a request for any racists in the room to leave. Unsurprisingly, no-one did.

There’s a lot of talk about love, peace and unity with a fair bit about politics, as you’d expect from the most overtly political band of the Two Tone era – songs are dedicated to ‘banksters’ and Prime Ministers.  It’s a strange audience, seeming to be more Friday night up town than regular gig-goers, and they needed encouraging. Roger, of course, is a master at working the crowd, and as ever he was running around the stage like he’s no older than young Ranking Junior alongside him, mixing patois with the Brummiest accent heard on this stage since Carl Chinn’s last performance.

Rock the Casbah, as always, gets a good reception, which is more than Roger does when after a particularly frantic bit of stage movement he announces that he’s knackered and only doing slow songs from then on. He isn’t, and he doesn’t

Ranking Full Stop and Mirror in the Bathroom bring the set to a close. The encore’s the usual mix of toasting, Roger on drums and Save it for Later plus Jackpot, which comes with a snatch of Come On EiIleen played by organist and former Dexy Micky Bellingham. The Beat have taken on an unpromising venue, a reluctant-at-first audience and some strange restriction that meant even with all the tickets sold the Town Hall was nowhere near full, and if they didn’t gain a resounding victory they certainly finished well on top.