The Spy From Cairo
Nublu In Outer Place 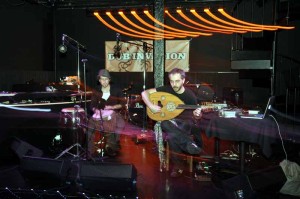 There have been nefarious goings-on in the East Village. Gentrification has been prompting rampantly hiked rents, and perhaps not coincidentally, the cops have been tightening their grip on the area’s old bohemian survivors. Old-lover joints have been cast out into the hinterland, with various problems/circumstances arising. Liquor licenses have been withdrawn. Bars have closed down due to financial travails. Violence has been committed. Hip hop shows have been raided. Other venues may follow in closure or curtailment soon. Of course, new haunts will emerge too: part of the endless cycle of rejuvenation. It’s just that they might not be located in Alphabet City, the East Village or the Lower East Side. Brooklyn beckons, but even now, Williamsburg appears to be moving towards Bushwick. From Bedford Avenue to the waterfront, there will be further closures, and even full-scale demolitions.

One of the best underground clubs in the city has recently been suffering. Nublu has been unfairly shuttered by the authorities, due to a single anonymous complaint. The reason cited is that it lies across the street from a place of worship. This has been the case for the last nine years, but suddenly it has become illegal to sell liquor in the club. The Jehovah’s Witnesses opposite have made it clear that they do not object to the proximity of Nublu. They are quite happy for it to exist in its old state on Avenue C.

Meanwhile, as the legal challenging process drags on, the Nublu crew have moved their entire operation to Lucky Cheng’s, on 1st Avenue, close to Houston Street. They’re calling the new basement location Nublu In Outer Place, allowing them to honour existing band bookings, and enabling them to continue filling the calendar. The new space is, fortunately, rather inviting, and will suffice until a definite decision is reached in the courts.

Tuesday is turning into reggae night, at least for a spell. The Spy From Cairo is the artist otherwise known as Zeb Visini, whose tools are the centuries-spanning combination of oud and laptop. His not-so-secret mission is to craft dub reggae with a distinct North African and Middle Eastern aura. Born in Italy, to Egyptian parents, Visini has long inhabited the East Village zone in question. For this Nublu set, he was playing oud and periodically attending to his laptop, partnered by a percussionist who was approximating goblet-drum clatterings on a djembe. The deep currents accumulated, with classical folkloric sounds mixing with more kitschy exotica elements, balancing nimbly. Visini’s oud cascades were highly detailed, providing scintillating trebly ornamentations atop the pulsating basslines. Other textures were provided by stray vocals samples, crafting a miasma of evocative Arabian stepping. Nearly everyone in the new Nublu den ended up gyrating in sympathy.

This was a good few weeks for dub reggae in NYC. The Dub Invasion festival succeeded in bringing out some of the genre’s biggest innovators, in a variety of Manhattan and Brooklyn venues. The English production pioneer Adrian Sherwood made a rare appearance in the city, showing up at Dominion NY, which is just across the street from Joe’s Pub on Lafayette Street. Puzzled by the preponderance of tuxedo-ed types milling around outside, I seriously wondered about the nature of a New York reggae crowd. I couldn’t gain entry to this glitzy emporium. Then it hit me: Dominion was the small door to the left of the swanky Indochine, and this was where the deep pulsations were happening.

Dominion NY seems to be pushing its wares with a new website, and maybe it’s a new-ish joint anyway. A long bar-room led down to the furthest end, where Sherwood was already at the controls. His extended set took in old-school 1970s dub, moving swiftly through 1980s and ’90s innovations from Sherwood’s On-U Sound imprint. It even closed out, hours later, when folks had started to disperse, with some productions clearly influenced by recent dubstep techniques. Sherwood has always moved with the times, his sounds reflecting each decade’s developments, and usually leading them from the vanguard. The club’s sound system was more than sufficiently pumping, delivering subsonic bass weight with clarity and stomach-churning vivacity. Even the fittings were rattling, deep inside The Room Of Rest.

The Dub Invasion festival continued. Scratch is a frequent visitor to NYC, and this gig found the king of Jamaican dub in focused mode, if such a state is possible for this disconnected rambler. He floated across the stage with a fixity of purpose, rarely letting up on the density of his toasting flow. Usually, the elaborately bespangled Perry arrives onstage trailing his suitcase, as if primed for a speedy getaway. This time, it looked like his luggage was already stowed in the aircraft hold, as Scratch and band were itching to exit, even when the crowd were baying for an encore. Perry even looked like he wanted to deliver, shaking hands and signing autographs on the front row as he gradually moved to the stage-side. Normally, he’d have been considerably more reclined, but presumably the crew had some pretty tight travel arrangements in place.

The Mad Professor
The Knitting Factory

This was the concluding night of Dub Invasion. The gig wasn’t even scheduled to begin until around midnight, but soundchecking was still ongoing, and the door-opening was delayed. This was going to be a late session! Around 1am, the Twilight Circus Dub posse was doing a fine job of opening up the proceedings. This is essentially Ryan Moore, formerly a member of alternative rock combo The Legendary Pink Dots. He was continually heralding the arrival of The Mad Professor, a London production/DJ contemporary of Adrian Sherwood. The Professor has built up a rumbling reputation from his long-running Ariwa Sounds label and studio, looking to Lee ‘Scratch’ Perry for fatherly guidance. The genuine blood lineage continues, as the Professor’s son Joe Ariwa stepped up to emcee. The hours throbbed by, and the Ariwa posse continually drew out massive slabs of dark, plunging bass. The back room of The Knit was rammed with dub acolytes, barely finding any space for anything more than slight bodily swaying. Atmosphere and sound were perfectly combined in a thundering tar pit of viscous low-end suction. This was a fitting conclusion to the excellent Dub Invasion sequence, finding a place for what has become almost a minority interest, an older uncle to the current dubstep vibrations.