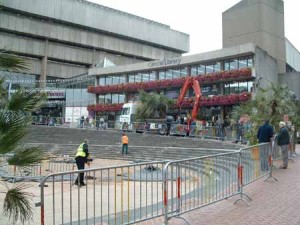 Readers of my articles may or may not be aware that I had been writing pieces about the Central Library for ‘The Stirrer’ until it closed down in September 2010.

My campaign to save it from demolition started in 2002 with a letter to the Birmingham Post challenging Councillor Ian Ward’s claim that it was ‘crumbling’ and only fit for demolition. I didn’t believe that was true at the time and documents released by the Council since have confirmed my hunch. So I’ve had plenty of practice at refuting the many and varied official arguments for its demolition.

The public debate about the fate of the Central Library still interests the media and a discussion on the ReStirred Forum entitled ‘The argument for demolishing the John Madin Central Library’ started by Martin Mullaney is still going strong today. I haven’t joined in on the forum either as myself or under a pseudonym.  However, Andy Foster – who is Chair of the Friends of the Library – and others have done a fine job dismantling Martin Mullaney’s arguments.

Martin Mullaney is a city councillor and cabinet member for Leisure Sport and Culture and politically accountable for policy on libraries. Although at one point he declared to his fellow posters, ‘I am on here as a private citizen’: This was greeted with incredulity.

Martin Mullaney’s initial argument and my responses can be boiled down as follows:

Recently Councillor Mullaney has argued that ‘Floor Plates’ were grounds for demolition.

The Floor Plate of an office block is the size and shape of the floor that can be rented to a tenant. But with changing work practices and downsizing smaller and cheaper floor plates are preferred. The architect-members of Friends of the Central Library, including John Madin – who designed many successful office blocks – tell me that the Floor Plates of the Central Library are ideal for office use.

He condemns the Library because the ceilings are too low for displaying contemporary works of art or photography. Yet, the Atrium is six floors high and there are a number of internal openings two floors high. It is often argued that extra height is needed for air-conditioning and other services that were unheard of when 70s buildings were designed (see my previous articles) but with natural ventilation, lighting and better insulation, the miniaturisation and portability of information technology, such physical requirements may become unnecessary. In any case Madin designed the Library with service ducts in all the floors rather than on the coffered ceilings and his 54 Hagley Road office block, designed at the same time as the Library, is still a highly desirable Grade A office.