Funny man Frank Skinner has donated his copy of a “life-changing” book to Bowel Cancer UK in an appeal for people to take part in a Big Book Swap this month. 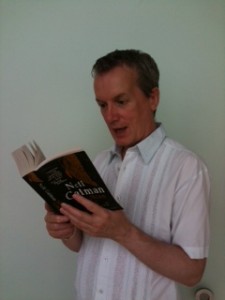 West Bromwich born comedian Frank named a novel based on ancient and modern mythology, American Gods by Neil Gaiman, as his favourite book.

Frank said: “This was a life-changing book for me because it got me looking for the magic in people – the specialness in that bloke on the train or the woman in the cake shop! It’s also a fabulous adventure that I was very sad to finish. I’m aching for the sequel.”

Hosting a book swap is easy. Having one at home is the perfect opportunity to catch up with friends or why not get together with work colleagues to share your favourite books? Get everyone to make a donation and then pass on the proceeds to Bowel Cancer UK.

Deborah Alsina, Chief Executive, explained: “Many of the patients and families we have helped have shared how certain books have changed their lives. They have drawn strength from them and reading has helped them to stay positive during their treatment. So get hold of your favourite book, organise a Big Book Swap in October and raise funds for Bowel Cancer UK at the same time!”

Frank’s book is one of a number donated by famous faces supporting the Big Book Swap including folk singer-songwriter Frank Turner and actress Jane Asher.

Bowel Cancer UK are auctioning the books from 24th – 31st October and lucky members of the public have the chance to own them by placing a minimum £5 bid on www.ebay.co.uk

If like Frank Skinner you’d like to support Bowel Cancer UK and hold a Big Book Swap, go to www.bowelcanceruk.org.uk/get-involved for a fundraising pack or call 020 7386 4006.

About Bowel Cancer
Bowel Cancer is the second most common cause of cancer death in the UK, affecting both men and women. Every year 40,000 people are diagnosed with bowel cancer and more than 16,250 people die of the disease.

About Frank Skinner
Frank Skinner grew up in the West Midlands. After studying English at university, he decided to try stand-up comedy. He won the Perrier Award in 1991, and moved to TV with The Frank Skinner Show in 1995. He has worked extensively with David Baddiel, with whom he had a number one song, ‘Three Lions’. He hosts a show on Absolute Radio every Saturday and his new book, Dispatches from the Sofa, is out now.