Alan Clawley has yet to discover how Birmingham’s City motto – Forward – came to be chosen. 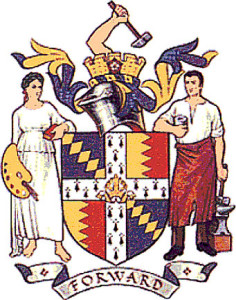 Everyone knows that the motto of Birmingham City Council is ‘Forward’ but as yet I haven’t been able to discover how it came to be chosen.

The motto appears on the very first coat of arms in 1839 and has remained there ever since.  Who were those foresighted city fathers who chose a motto that would perfectly suit Birmingham’s style for more than a century? The City’s motto of ‘looking ahead’ was an ambition that was entirely understandable in 1839 as Birmingham only became a city in 1889 and had very little to look back on. But ‘Forward’ has a very different meaning in 2011.

The city’s obsessive focus on the future was most clearly seen in the life and work of Henry Manzoni who once said “I have never been very certain as to the value of tangible links with the past. They are often more sentimental than valuable… As to Birmingham’s buildings, there is little of real worth in our architecture. Its replacement should be an improvement… As for future generations, I think they will be better occupied in applying their thoughts and energies to forging ahead, rather than looking backward.”

But unlike their predecessors the councillors of today have a more difficult job to live up to their motto because they have more glory to look back on than to look forward to. That is of course, a natural feature of aging.

The council has had a huge physical legacy to look after. Some of it has already been handed over to others but much of it is still owned by a council that now claims it hasn’t the money to spend on its upkeep. The Welsh dams, water pipelines, reservoirs, buses, trams, gasworks, power stations and municipal banks once owned by the Corporation have already been sold off thereby relieving it of the financial burden of repairing and renewing aging infrastructure and plant. Even the Town Hall has been hived off to a charitable trust. But the council hasn’t yet managed to get rid of its entire legacy of Victorian and Edwardian parks, swimming baths, libraries, museums, art galleries and school buildings much as it would like to. Nor has it had much success in off-loading its more recent legacy of council housing to its occupiers, who voted some years ago that it should remain under council ownership.

It’s a puzzle how, until the last quarter of the 20th century, council’s could afford to build what we now say is impossibly expensive just to maintain, even less to replace.  Birmingham once owned and ran an extensive tram system but now struggles to extend the Metro a few hundred yards from Snow Hill Station to Five Ways.

So, what can Birmingham Council do to live up to its motto in 2011 and beyond? It can look forward to a new and bigger central library, which has so far managed to buck the trend of dumping or down-sizing publicly-owned assets. It will be able to look forward to a stainless steel façade to the concourse of New Street Station although the rail system itself will remain largely Victorian.

Otherwise we can expect the council to try to get rid of its more troublesome liabilities, but they will find it increasingly difficult to find private enterprises or charitable trusts who are willing to take on assets like public parks, libraries and art galleries that don’t generate a serious income. These facilities were always seen as ‘public goods’ and were often donated by wealthy local philanthropists. Business people are not queuing up to buy them off the council even at a knock-down price unless they can cross subsidise the unprofitable bits by stripping them of their most valuable assets. Selling off the land on the periphery of public parks for private housing development is a tempting option for the council. Sub-letting public libraries to booksellers and ice-cream vendors is another.

It is said these days that the 60s generation refuse to grow (or act) old. That may be relatively harmless in an individual; but ‘age denial’ in the city council feeds an unhealthy obsession with the latest fashion and a studied disdain of the past.

Spending huge sums of public money on flashy buildings is like the embarrassing pensioner who dresses young in a vain attempt to stave off old age. Both can only look forward to declining powers and responsibilities, yet strangely enough, in the case of the council, it won’t mean smaller council tax bills.