Andy Munro reports on another round of man against nature. 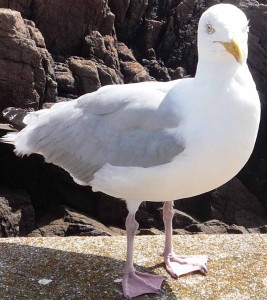 If ever the world goes into financial meltdown and cities fall into an Orwellian dereliction then it will be a close contest between seagulls and the buddleja as to who will reclaim the land from mankind.

At first, the buddleja seemed a sound bet inhabiting every square inch of vacant industrial land but I’ve decided to give the seagulls my vote following their invasion of the city centre. The threat was brought home to me at a presentation by an unfortunate from Birmingham City Council’s Environmental Services, at a recent Ladywood Ward Committee meeting.

Feelings were running high in the Jewellery Quarter particularly and I had personally been inundated with complaints from residents who complained  that a good night’s sleep was just a distant memory as they suffered  a literal remake of The Birds. Tales abound ranging from black cars turning white under the weight of guano, residents stepping in bird poo as big as elephant’s wotsits, bird cries registering the same decibel levels as a Take That convention and, most frightening of all, seagulls swooping down to try and snatch babes in arms.

Unsuprisingly, cries have gone up from even the most mild-mannered residents to exterminate them Terminator style and therefore solve the Quarter’s insomnia problem in one ‘fowl’ swoop.

But it’s not that simple…

Firstly the seagulls (or urban gulls to be ornithologically PC) are split into black tipped gulls and herring gulls. The latter are a protected species and very difficult to tell apart when they’re young unless you’re a budding Bill Oddie. This means a seagull shooting season is currently out of bounds, although seagull kebabs or gull goulash spring readily to mind.

Consequently, the guys from Enviro Services have tried a number of alternative strategies commencing with mock hawks which the, apparently not unintelligent, gulls have treated with contempt and used as a convenient shelter for egg laying. The next idea was calling in the ornithological equivalent of the SAS (Seagull Attack Service) i.e. a hawk. Apparently this is unlikely to scare the seagulls who can apparently look after themselves – know wot I mean?

The latest ploy is to cunningly replace real eggs with specially made dummies, but at £1 each they don’t come cheep. This is supposed to fool the gulls who will be so busy trying to hatch a dud that they’ll be too engrossed to make a noise. Additionally it will cut down on the amount of fledgings, but unfortunately it will be some time before anybody knows if it really works. Roof access also makes this strategy a difficult one to implement.

It’s a problem that literally won’t fly away, with an estimated urban gull population of over 250,000 and rapidly increasing. Give me buddleja any day. It’s just a shame that it’s not poisonous and the gulls’ favourite food instead of discarded Kentucky Fried Chicken and kebabs.