Whether we like them or loathe their appearance or their alleged symbolism, we can at least agree that the intersecting rings of aluminium now appearing on the new library will not make it work any better as a library. They have no function other than the obvious one of making a plain building look more interesting. 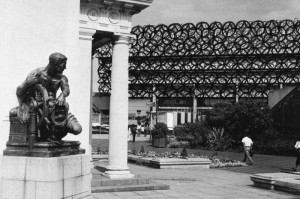 Madin’s library is transformed with a veil of rings.

By clothing a modernist building in a fancy dress the architect of the new library appears to have abandoned Functionalism, a theory invented by the Modern Movement that made decoration a moral crime.

The pioneering Modern architects were inspired by unadorned structures such as grain silos, aircraft and ocean liners. They rejected the past when buildings were plastered with bits of historical junk whether classical or mediaeval in origin. The twentieth century was to be the Age of the Machine and its spare aesthetic doctrine would be Functionalism.

There is no doubt that the return of decoration is a response to the widespread dislike of twentieth century architecture. The starkly functionalist architecture of the existing Central Library is unpopular enough to give the Council the excuse they need to destroy it. Yet, beneath its surface the new library is remarkably like the existing one. It may have round atriums rather than rectangular ones but it still needs escalators, toilets and a place to store and look at books.

Its intriguing to imagine the effect of giving the existing Library a similar new skin to cover its age-marked concrete. Perhaps it could have thrown off its austere image and become popular overnight.

But it is just possible that what impresses the public about the new library is simply that it is very expensive, and that a lot of money – £3 million according the library chief Brian Gambles – is being spent, not on the needs of a library, but on a non-essential façade. 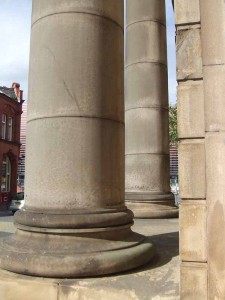 The parallels with the past are telling. The cathedrals were built many times bigger that they had to be and covered with sculpture and decoration to the glory of God (and some would say the temporal church). Victorian banks and building societies, town councils, railway companies, and waterworks companies, all built extravagant and ornate buildings to impress the public with their power and wealth.

So the design of new library turns the clock back to the ostentatious nineteenth century. But we are told that the City Council (and the country) is short of money now so, if that is true, it seems a strange time to flaunt symbols of wealth.  Which only leaves power, and that too is also a declining asset these days.