For a short spell, Martin Longley decided that he would only check out bands with drumming leaders…

Ches Smith & These Arches
The Stone

John Zorn’s Stone was pretty much sold out for this single set by drummer Ches Smith’s five-piece band. That’s 74 folks crammed into a thankfully air-conditioned zone. The reason that the normally silenced a/c was allowed to thrum is that These Arches mostly rock out, reaching volume levels that can mask such hummings. Even so, the interior was still sweltering, post-Hurricane Irene. The reason that the gig sold out was down to the band being something of an avant supergroup. Any single member would have enticed the punters, but a guesting Nels Cline probably tipped matters over the edge. These assembled artists are frequently sighted around NYC, but this particular formation amounted to an unusual meeting of participants.

The band is an outlet for Smith’s compositions, with all players fixedly glued to their sheet music. This was disconcerting, as the end product, although highly detailed, frequently shifting and massively disciplined, still possessed the character of a post-Velvet Underground riffing session, released from high-arty bondage. There was a strong odour of grime, a tough sense of gutter survival. It was rock performed by readers, jazz performed by punks. This is not surprising, given that Smith happily inhabits these two camps, amongst many more. An audience member might witness his more rocking style as a member of Marc Ribot’s Ceramic Dog, or Smith’s more abstract freedoms by the side of Tim Berne, but These Arches acts as a forum for a true composite style, where the drummer can move from coiled rhythms to untethered splashing in the space of a single composition.

Observing the players, they might have seemed completely immersed in sight-reading, but the music flooding forth was totally bereft of any inhibition. These Arches appear malleable. Smith was joined by his regular colleagues Mary Halvorson (guitar) and Andrea Parkins (accordion), but the line-up was completed by the aforementioned Cline (guitar) and Berne (alto saxophone). These last pair exist somewhere in the hinterland between guests and occasional conspirators.

Structurally, Berne and Smith were on the outside, both literally, in terms of their semi-circle placement, and musically, in terms of being allowed a certain amount of autonomy. Halvorson, Cline and Parkins seemed to operate as a section, immured in a bog of effects pedals like you’d never seen before: this produced an attractive result of needing to watch them carefully, to deduce who might be responsible for which scuzzed layer of collective phrasing. Parkins operated an action-accordion, hefting its bellows, making it as weighty as a Hammond organ. Halvorson and Cline struck up an immediately close rapport, often chasing each other’s pointillist runs. At other times, Halvorson would opt for lower tones, almost staking out bassline territory. No one was overloud, even if their textures were of the sort that would normally be governed by extreme amplification.

Berne was the chief melodicist, corralled into a less decorated mode than usual, hugging each theme with an emphatic diligence. Smith demonstrated his amazing capacity for powerful subtlety, hitting hard, then dampening cymbals on the run, flashing around his skins with rattling glances, rimshots clattering as part of the beats. Often, he could imply entire patterns with the barest of blows. Another notable stretch was when the guitarists played a flying lattice in tandem, sympathetically intertwining at high speed.

Smith managed to make his pieces sound loose, even though it was apparent that these were very pre-meditated structures. Contrast was paramount. All five musicians would be riffing full tilt, then the emphasis would slam into an interlude of spacious freedom before cutting back to the same accumulating rock-drive. At the finish, the audience were baying for an encore, but there really wasn’t the time. These Arches had to move out to make way for the joint’s 10pm set. Nevertheless, their performance was so substantial that such a circumstance didn’t seem at all frustrating. We had just experienced music in its most uncut form, and we were sated.

Ending The Stone’s two-week run of Pi Recordings curatorship, the appearance of Tyshawn Sorey was timed to coincide with the release of his Oblique-1 album. Not that the gig was remotely similar in its nature. The disc finds Sorey rooted to his drumstool, playing mostly dense, propulsive jazz with his latest quintet. This set offered the chance to catch Sorey in a solo state, going beyond the drumkit in a deeply exploratory vein. This New Jersey native was studying in Connecticut, but has recently settled back in the NYC area, and already his local gig-count is sharply rising.

Perhaps bewilderingly, Sorey managed to pull in a very youthful crowd, once again packing The Stone, but not particularly with the older Downtown crew. The puzzle revolves around Sorey’s music being part of the free jazz lineage, but drawing in an audience who are probably well-versed in electronica and rock’n’roll. Perhaps it’s simply his youthfulness.

Refreshingly, Sorey is a performer who has already cultivated a very individual manner. It’s glaringly obvious that he’s listening to all manner of musically oddball forms. It’s of paramount importance that he’s covering improvisation of the most intuitive, childlike type, as well as being attuned to finely-detailed composition. He seems to be at once a primitivist outsider and a studied formalist.

Sorey pre-instructed the venue’s doorman to start up his iPod, which proceeded to play a sound collage that was surely assembled by the drummer himself. A dense hubbub ensued, with Captain Beefheart popping out as one of its recognisable elements. Then, Sorey opened the door to the downstairs dressing room, and ambled up, clutching his melodica and trombone.

First, he sat at the piano and played a rumination on space, casting an occasional glance up at the audience to gauge their reaction. Was it just that the Stone website hinted at a possible klezmer repertoire, or were there actually stray traces of Jewish song? Some of Sorey’s melodic hints called to mind the compositions of Maurice El Médioni. Then Sorey moved to his more accustomed drums, although his solo piece was anything but accustomed. He was probing the qualities of a prayer bowl, then a small gong, or a cowbell, picking out the tiniest of shimmering sounds, using furball sticks, then immediately muting his strikes. He was engaging in a particular cycle of incremental activity, eventually crashing metal, cymbals and bass drum simultaneously, setting up an unpredictable rhythmic motion. Breaths were collectively held. Sorey’s intensity was infectious and commanding. He seems like a quiet, introverted soul, but there’s also a strong feeling of focused power. He’s capable of building into an almost frighteningly brutal release, setting up a complicated and unpredictable cycle of metal and skin blurring.

Out came the trombone. On went the iPod. This time, the soundtrack was a hyper-granular close-up of a turntable out-groove. Sorey disappeared into the toilet to, presumably, fill his instrument with water. After a while he emerged, removed the bend of his ‘bone, and blew. Water spouted across the row of listeners behind him: a semi-pleasant shock, and a defusing of meditational tension. Sorey proceeded to play along with the crackles’n’clicks, adding his own water-clogged hackings.

Then he delivered a short, melodic piece on the melodica, the most conventional and direct part of the set. Back at the drums, he played along with another recording, soloing at length in a phonetic matching of the interview tape he’d set rolling. This was performed with a remarkable precision, reminding the listener of the way that Steve Reich has explored the twinning of voice-snatches with notated mimicry.

Sorey gave one of the most serious, studied and nail-biting performances possible, but also, paradoxically, it was humorous, natural, animistic and completely spontaneous. We were transfixed. 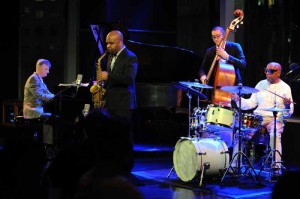 Haynes possesses the utmost in veteran distinction, and is also one of the few surviving pioneers of jazz drumming. This Boston master also manages to exude the vitality and skilled application of a player many decades younger than his 86 years. The Fountain Of Youth bandname is highly appropriate. There are massive benefits in maintaining a stable quartet formation, allowing a special rapport to pervade the music-making process.

For this opening set of a week’s run at Dizzy’s, the Fountain was already gushing at full pressure. Haynes was joined by his usual cohorts, alto saxophonist Jaleel Shaw and bassman David Wong, but the piano stool was inhabited by a guesting Dave Kikoski, a longtime playing partner of the leader. Haynes kept a light touch for his propellant skimming, periodically emphasising each tune-peak with a sudden boom. He kept cymbals shimmering in the air, spinning like plates held aloft on skinny sticks. As ever, Haynes couldn’t resist a walkabout, investigating hidden parts of his kit as he circled around it, targeting strategic strikes.

The soloing regime might have revolved around an expected sequence, turning from horn, to piano, to bass, but this was never allowed to become a complacent routine. The agility and imagination of the soloists consistently took their expressions into the realms of gripping structural unpredictability. This was particularly the case with Kikoski, whose spontaneous inventions were unlimited, racing with a flamboyant attention to percussive complexity.