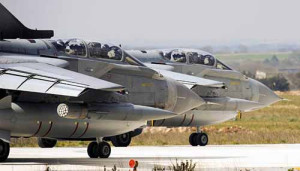 On 21 September NATO announced that it was extending its air-and-sea campaign in Libya for up to 90 days as the country’s new rulers try to dislodge well-armed Gaddafi loyalists who are holding out in several towns. The agreement to extend the UN-mandated mission to protect civilians, of which NATO took full command on 31 March, came at a meeting of NATO ambassadors in Brussels.

It is the second 90-day extension, and it was approved less than a week before the campaign was set to end. NATO maintained its almost daily bombing missions with 44 so-called ‘strike sorties’ on the same day, with key ‘hits’ including a “Command and Control Node” and “five Surface to Air Missile Systems” near Sirte, as well as “four anti-aircraft guns” and one “vehicle storage depot” near Hun.

NATO Secretary General Rasmussen said in a statement that the Libya campaign could end sooner. “We are determined to continue our mission for as long as necessary, but ready to terminate the operation as soon as possible. While the technical rollover is for up to 90 days, the review will allow us to end our tasks at any time”.

Clearly the NATO ambassadors and Secretary General were oblivious to the fact that this was also UN Peace Day: a day for wide-scale community action and for UN agencies and aid organisations to safely carry out life-saving work. In 2001 the UN member states unanimously adopted the first ever day of global ceasefire and non-violence. Peace day is now celebrated annually on 21 September.

But obviously not at NATO HQ in Brussels.

Libya was not the only conflict zone in which NATO military actions continued as normal on UN Peace Day. In Afghanistan, the NATO-led coalition also maintained its unrelenting military tempo, announcing that it had killed a Taliban commander in an air strike on 21 September in Wardak province. There are still around 140,000 foreign troops in Afghanistan, about 100,000 of them from the United States, fighting a Taliban-led insurgency.