Ashley Blake says he’s the fittest he’s ever been – thanks to the many hours spent pumping iron at Her Majesty’s Pleasure. Sitting outside a Moseley restaurant and bar at lunchtime in a short-sleeved T-shirt, his upper arm biceps are testament to how hard he’s worked those irons. 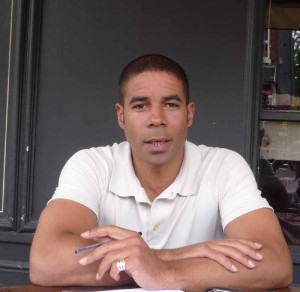 “I had many different jobs in prison; they kept me busy,” he says with a grim smile. “But at the end of January last year, they ran out of things to do with me, so they just stuck me in the gym. As a result I’m as fit as a fiddle – the fittest I’ve ever been. Bizarrely, until I went to jail, I’d never been in a gym in my life.”

“Personal hygiene isn’t high on the priority list in an all-male prison wing,” he says.

There were better jobs, though. Placed on an educational course, it soon became obvious that Ashley, who worked on several news and investigative programmes during his 15-year career as a broadcast journalist, was as competent as the tutor. “I ended up being the teacher’s classroom assistant.”

The 42-year-old also became a HOPIN (Helping Other Prisoners In Need) rep, which included assisting other inmates to write letters to friends and family.

“The literacy and numeracy standards I encountered were astonishingly low; it’s not an exaggeration to say that most people couldn’t write their own name. So with letter writing and form-filling they didn’t have a clue.”

Ashley feared his celebrity status might single him out for rough treatment in jail, but says his fellow inmates were “protective” of him.

“There’s no side to me; so although everyone thought I was a millionaire, I think my character showed through and as a result they were protective of me.”

This might have something to do with Ashley’s background. He grew up in the Lozells area of Birmingham, the youngest of six children brought up by a single mother.

“My upbringing made me streetwise. Yes, I was on the telly for 15 years and have been surrounded by people who think they are much better than they are; but I’ve never been that type of person. I’m quite proud of where I came from. However well I did in my TV career, I still had my feet on the ground.”

While at the BBC, Ashley regularly went into inner-city schools to talk to pupils. “I spent time in schools saying to kids ‘don’t write yourselves off just because you don’t have a privileged background; I was able to make something of my life’.”

Ironically, of course, Ashley found himself in the very situation he was trying to help young people avoid.

But the ambition that drove him to forge a career in TV is still there – and he is now getting his life back on track.

He received thousands of letters while in prison, all of them supportive, he says. “Since I’ve come out as well, the response has been pretty much the same. People have said things like ‘I want to see you back on the telly as soon as possible’.”

So does he think he will be back on our screens any time soon?

“I have hopes of returning to television. I don’t think the BBC would want me back, although I worked for them for ten years and had a blemish-free career. But I can’t see me going back to reading the news or doing Inside Out, although there are on-screen people who have done worse things than me.”

He admits he didn’t expect to go to jail. “There was a month between the guilty verdict and sentencing and I was still hoping for a suspended sentence or community service or a mixture of both. When the judge said two years in jail, I almost fell over.

“I’m not saying it’s an injustice; I just felt it was unfair. I never wanted to get off and always maintained, from day one, that I’d serve whatever sentence that came up – but that didn’t mean I’d be happy about it.”

Prison, he says, wasn’t as bad as he imagined it would be. In fact, it was significantly better. And, as a journalist, he found it “absolutely fascinating” for a while.

“Then the novelty wears off and the dark moments kick in. Even though it wasn’t as bad as I expected, it’s still a dreadful, depressing place. Every emotion you feel outside prison is multiplied by 100 inside.”

He had to share a cell in both jails. “If you get on well it was okay; if you didn’t it could be a nightmare.”

Ashley’s bid to be freed on licence after seven-and-a-half months was turned down by the prison authorities.

“You have to detail your plans and I said I intended to write some TV programme ideas when I came out, but they wanted me to do something less high profile, so the decision was delayed and then turned down on the grounds they thought I might breach the conditions of my licence.”

He returned to the Bearwood home he shared with long-time girlfriend, Jess, who stood by him, but the relationship has since ended because of the strain his conviction and incarceration put on the relationship. They remain great friends, however.

Ashley has had no job and no income and because he remained on licence until September 1 this year – which meant he could get recalled to jail if he breached any of the stipulated conditions – it made finding work more difficult. So he spent the time transferring his hand-written prison diaries on to the computer, which he has turned into a book, Shining Bright Lights in Dark Places, published on September 5, and having informal discussions about a possible return to the television.

“All those years I worked hard and now I’ve nothing to show for it. And, of course, there’s the loss of my reputation,” he says.

“I don’t think you’ll see me on a park bench swigging from a bottle in a brown paper bag, but it’s enough to make you do that. I think perhaps it’s my upbringing and the work ethic my Mum instilled into me that I have to thank for the fact I’ve not gone under.

“I had a fantastic job at the BBC, but at the end of the day it’s only a job. You have to put it into perspective. I’ll get another job.

“I don’t want people to feel sorry for me, but the reality of my situation is what it is. I just feel it could have happened to anyone. My gripe is that although I did something wrong, what happened as a result was out of proportion to the crime.” 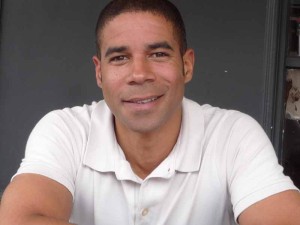 Then Ashley smiles that familiar TV smile, eases his pumped-up arms into his jacket and says brightly: “It’s all really annoying – but it will be fine in the end.”