Former BBC television presenter Ashley Blake has spoken of his “deep sense of unfairness” at being handed a two-year jail sentence for “accidentally” wounding a teenager whose group of friends was causing trouble at his Sutton Coldfield restaurant. 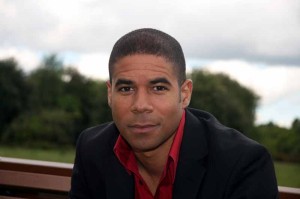 In the first interview he did since being released from prison on licence after serving nine months, the 42-year-old journalist and broadcaster said he felt angry that the incident – in which he injured 17-year-old Greg Jones in the face with a patio umbrella pole – had robbed him of his liberty, destroyed his TV career, restaurant business and reputation and destroyed his relationship with his long-term girlfriend.

“I’m not trying to put the record straight and I’m not asking people to feel sorry for me – what happened is what happened,” said Ashley, who was freed from Stafford Prison in June last year. “But it is a very fine line between what you’re allowed to do to protect your property and what you get punished for.

“I do feel a deep sense of unfairness that after an unblemished ten-year career at the BBC, an incident like that, in which I accidentally hit someone in the face who was in a group of young people who had been drinking and were smashing up my business, resulted in the sentence I received.

“I’ve been out of prison for more than a year, but things have been far from easy. Until September 1 this year I was on licence. “I’ve had no job and no income. All those years I worked hard and I’ve nothing to show for it. And, of course, I have lost my reputation.

“I don’t think you’ll see me on a park bench drinking out of a bottle hidden in a brown paper bag – but I can tell you, it’s enough to make you do that. I think perhaps my upbringing, which was tough, has helped me cope and not go under.”

Ashley, who was a reporter and presenter on Midlands Today and also presented Inside Out and Watchdog, is hoping to re-launch his television career “as soon as possible” and has turned the diary he kept in prison into a book, Shining Bright Lights in Dark Places, which is published on September 5.

“I can’t see me going back to reading the news or doing Inside Out, but there are on-screen people who have done a lot worse things than I did.

“My feeling is that what happened that night could have happened to anyone. My restaurant – a business I’d worked hard at and invested all my money in – was being broken up and my instinct was to protect it.”

Ashley was jailed in September 2009 after being convicted a month earlier at Birmingham Crown Court of unlawful wounding, after swinging a wooden pole above his head and striking the teenager in the face, and attempting to pervert the course of justice by throwing the pole into a garden to hide it from police. But he was cleared of wounding with intent to cause grievous bodily harm.

The incident happened at an 18th birthday party in January last year at the Thai restaurant and bar Ashley then owned, The Place 2 B in Chester Road, Boldmere.

The jury heard Ashley ran to fetch the 3ft-long pole from behind the bar after customer Steven Sproule punched 17-year-old Adam Finn in the face, leaving him unconscious on the ground. Adam Finn’s friends became angry and upset following the attack.

The court was told Greg Jones was trying to calm the situation when he was attacked by Ashley, suffering injuries to his lip and chin.

Ashley told jurors he used the pole, normally used to secure the restaurant’s outer door, as a “bat” to fend off bottles, ashtrays and broken-up furniture being hurled at him by a crowd of up to 30 people.