The Government, well Transport Minister Philip Hammond, has a cunning plan to get the country moving again by increasing the speed limit on motorways from 70 miles per hour to 80.

This makes sense. If journey times were reduced busy and highly paid executives could pack more into their day. They would eschew the chance to have a few more minutes in bed and embrace the money-making opportunities that those extra minutes will offer them.

Perhaps the secret to Germany’s success has been the lack of a speed limit on their motorway network. So why not do away with the speed limit in the UK completely?

It’s obvious that the panacea for the nations economic ills will be travelling at the speed most cars travel at anyway, but legally.

Indeed, my experience of motorway driving is that the 70 speed limit really means travelling at 80mph anyway. Thus increasing the legal limit to 80 will mean a nominal limit of 90 – a win-win!

Of course, barrelling into a stationary vehicle at 80 won’t be much more dramatic than doing the same thing at either 70 or 90. Modern cars are safer, more fuel efficient and capable of greater cruising speeds than when the original speed limit was introduced – if my memory serves correctly, to conserve fuel in the face of an oil shortage. That was just a silly idea. Few cars in those days were capable of sustained cruising at more than 70mph without blowing a head gasket. 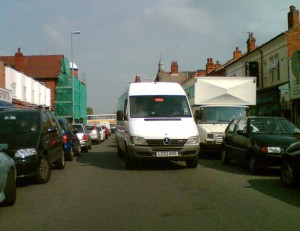 Thinking that taking lorries off the motorway system would actually be another way to get traffic moving faster is a non-starter. Without an efficient rail network to carry freight to distribution points how would containers be where they should be? And anyway, the roads would be clogged with white vans picking up and delivering container contents to where they were needed. 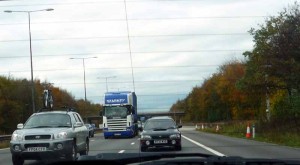 The idea that motorway traffic is held up by lorries overtaking other lorries, thus reducing three lanes to one, is another fallacy. Or that those drivers who sit in the centre lane at 65 miles per hour are doing anything other than driving safely rather than delaying busy executives.

No, raising the speed limit is definitely the way to go.

I’d also suggest a law requiring all children to run to and from school. This would make the ‘school run’ a genuine epithet and reduce traffic on local roads.