Birmingham city traffic and other restrictions will be put into place ahead of the the LibDem Autumn Conference at the ICC from 17th-21st September. 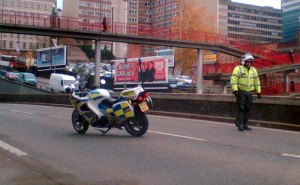 The following vehicle restrictions will apply. During these times access will not be permitted to any vehicle.

Broad Street open to all traffic but some localised road width restrictions.

Broad Street (Gas Street to Paradise Circus), Bridge Street (near to the Hyatt Regency Hotel) and Cambridge Street (Brindley Drive to Civic Close) will be pedestrian access only. Vehicle access for residents to Civic Close will be via King Edwards Road only.

Broad Street will not be available as a through route for vehicles during the conference. Motorists are therefore advised to use the following alternative routes:

All temporary traffic restrictions will be removed from 5am on Thursday 22nd September 2011.

In addition, Bridge Street pay and display parking will be suspended during the conference.

The taxi ranks outside the Reflex bar in Broad Street and in Bridge Street, next to the Hyatt Regency Hotel, will be suspended during the conference. Temporary ranks ranks will be provided in Broad Street (Oozells Street to Gas Street).

All of the bars and restaurants along Broad Street and in Brindleyplace will be open as usual. The Hyatt Regency Hotel remains open. The National Sealife Centre, Crescent Theatre, Ikon and Number Nine Galleries in Brindleyplace are unaffected by the conference.

The ICC will be closed to the public from Thursday 15th September, reopening Thursday 22nd September at 7am. The public will not be able to access Symphony Hall, Symphony Hall box office, Cafe Vite or Castle Galleries during this time. A temporary Box Office station will be located in the main marquee on Centenary Square offering the opportunity to book and collect tickets for future events.