The Mayor of Birmingham, Councillor Anita Ward set the wheels of a local initiative to get more people on their bikes in motion in Victoria Square earlier today by supporting the Sky Ride Local scheme. 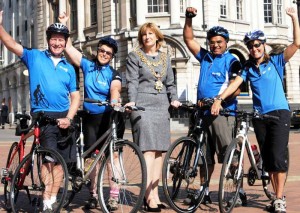 Sky Ride Locals are a series of free, family bike rides organised by British Cycling and Sky in partnership with Birmingham City Council to help more people enjoy getting on a bike on safe routes.

The rides, more than 25 in total, are led by British Cycling trained Ride Leaders and will run in Birmingham until October primarily along safe routes and traffic-free spaces offering families a chance to get out and explore their local area with like-minded people.

They include women-only bike rides, as well as special rides for mums and children, that will continue to run throughout the year led by British Cycling trained female Breeze champions.

The opportunities are part of Sky Ride, a nationwide campaign by Sky and British Cycling to get more one million more people on their bikes by 2013.

Cllr Ward encouraged everyone to get involved.

She said:  “It doesn’t matter what age you are, or your experience on a bike. There are rides to suit everyone.”

Almost a quarter of the UK population are now cyclists, according to a new report from the London School of Economics (LSE), which quantifies for the first time the full economic success story of the UK’s cycling sector.

The report, published earlier this month by Sky and British Cycling, indicates that cycling generates £2.9 billion for the British economy – equivalent to a value of £230 for every biking Briton in the country.

Dawn Rahman, from British Cycling, said that providing free, weekly led cycle rides through Sky Ride Local will help to educate more people about safe routes and make it easier for them to have fun riding a bike.

She said: “For some it’s about getting on their bikes to save some money, others it may be about the environment, but for others it’s about the fun and enjoyment of getting out, meeting other people, and getting some fresh air with friends and family.”

Details of the local Birmingham rides can be found at www.goskyride.com/birmingham