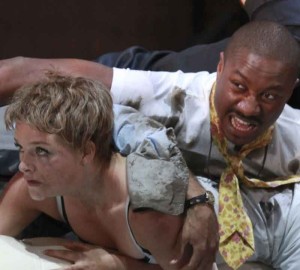 ‘Finally…’ my companion said to me, ‘a Shakespeare comedy that’s funny.’

All too often the funny bits in plays by Our Will are met with a lonely papery bark of a laugh from a retired Oxbridge don who last smelled fresh air in 1948- a muffled guffaw at a Tudor riposte that hasn’t really been  understood since Queen Anne’s  reign.

You hear it and wonder if you are thick or the play’s jokes just don’t travel after 400 years.

But with the new Midsummer Night’s Dream- on at the RSC through the autumn- the audience gets its money’s worth. It’s a hoot.

The mechanical ‘actors’ are bumbling royal palace repairmen spending a lot of time trying to fix a burst something or other under the stage; the lovers get all confused and het up in the magic of the forest; and, Titania (Pippa Nixon) surely falls for an ass as no one can tumble for a donkey.

Lucy Briggs-Owen steals the show as a bubbling crying-like-a-six-year old Helena who can barely say her lines for her burbling as she frets about her tattered love life. And all the lovers go through an energetic gymnastic session chasing each other around and scrapping.

A weak point might be Arsher Ali’s Puck. He just doesn’t pull it off. That puckish gleam in the eye just isn’t there. But all else shines- a night to remember.