Readers of a certain age will remember Tiswas, which until recently set the standard for a TV programme being hugely popular with a much older audience than the one it was targeted at. Originally aimed at under-elevens, it proved a massive hit with childish adults everywhere. 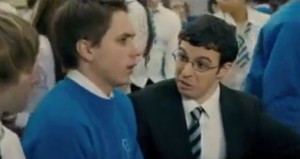 Tiswas’s success has been aped by the Inbetweeners, which for those who were unfortunate enough to miss its three series, told the story of four A-level students in those worrying years between legally being old enough to have sex (at which they invariably failed) and getting drunk (at which they often succeeded). Subtle it wasn’t, but it was not only funny, it was painfully realistic enough to gain a cult following amongst anyone who could remember that far back into their adolescence.

Naturally, it couldn’t go on forever and so what better way to bring the Inbetweeners saga to a close than with that most British of cinema traditions – a film based on a TV series.

Of course, the older members of the audience can remember the golden age of seventies sitcoms, most of which were translated into film; Love Thy Neighbour, George & Mildred and who can forget those three cinema classics that formed the On The Buses trilogy? So there was definitely a bit of apprehension at the start of Inbetweeners.

And that lasted until the first joke – about five seconds in. After that it was one long version of a particularly good episode of the series. There wasn’t much preamble or attempts to introduce a wider context into the story; this was the not-so-fab four doing what they’ve always done, namely competing to see who could make fools of themselves in the most embarrassing way possible. I could talk about how there was an underlying message throughout, how the uplifting ending rounded the lads’ ádventures off perfectly and how Simon Bird is developing into a fine actor, but that would be superfluous because this is a comedy and therefore can only be judged as such. If it makes you laugh it’s a good film and if it doesn’t it’s a bad one.

Inbetweeners is a very good film. It’s got vulgar jokes, cringemakingly embarrassing jokes and jokes that are far more subtle than the writers have ever been given credit for. So funny, in fact, that it’s a bit disconcerting to be laughing about some of the film’s typical subjects for humour while sitting next to someone who appears to be about twelve. Maybe some enterprising cinema should be thinking about an over-30s screening.