What would happen to a private individual who leased a property from a charitable trust and then let that property go to rack and ruin? 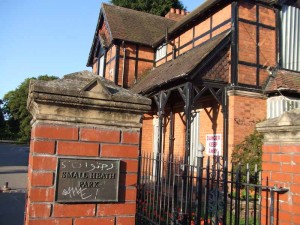 Surely no responsible public body like the City Council would behave in this way and expect to get away with it?

But in the case of Small Heath Park Lodge this is exactly what has happened. When Louisa Ryland donated 41 acres of farmland to the people of Birmingham to create a new park she would have never imagined that 100 years later a committee of City Councillors acting as trustees would have presided over its decline until stripping its assets was the only way they could think of to relieve themselves of their burden. 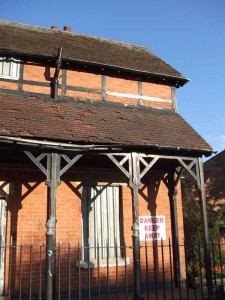 Today the Lodge, once the home of the Park Manager lies derelict. The lake is increasingly polluted and never fished. Boating on the lake is a distant memory. The bandstand has not seen action for many years and suffers repeated damage. The former putting green is permanently flooded. There are fewer trees. A hard, low-maintenance play area has replaced the tennis courts and bowling green with its thatched pavilion. Needless to say the swimming pool, paddling pool, refreshment pavilion and play centre are long gone. There is of course lots of grass but large areas of that have been colonised by the growing flock of Canada Geese.

The Park is supported by the voluntary, non-party-political, Friends of Small Heath Park, but they are fighting a desperate rearguard action against the odds. Once a month the group meets with staff from the City who give what professional support they can, but they all say there is not enough money. As well as pressing for day-to-day improvements the Friends commissioned plans to restore the Lodge for community use. But they have been faced with a barrier of official excuses. In the meantime the Lodge falls further into disrepair.

The Friends have good reason to suspect the good faith of the Council. Kingston Hill Recreation Ground nearby was donated to the people of Birmingham and also held in trust by councillors, but that did not stop the Council selling off a good part of it to the developers of Bordesley Village. In return the people of Birmingham were given a smaller ornamental park surrounded by new housing that now contributes little to the wider public. It has in effect been privatised.

To add insult to injury the Friends discovered that the Council had a list of parks for which National Lottery applications would be supported. Small Heath Park was not on that list but the much smaller Highgate Park was.

When Councillor John Alden, Chair of the Charities Committee, visited the Park and attended a Friends meeting in 2007, hopes were raised that a senior politician in the ruling coalition would get the desired action. A Friends delegation met the council’s legal staff and then waited. When Daphne Gaved, LibDem councillor for South Yardley in which the Park is situated, joined the Friends committee and began working on the case in 2008, a member of the committee remarked that progress was now guaranteed.

Today, despite the praiseworthy efforts of Councillor Gaved, the Lodge is in a worse state than ever. The Friends were told at their last meeting that Councillor Alden will be applying to charitable trusts for grants but no timetable or plan of consultation was mentioned.

Since 2010 the government has called on voluntary groups like Friends of Small Heath Park to take up the slack caused by cuts in publicly-funded services. That may have been all very well when public services were properly funded, but when volunteers are expected to spend their time and energy making good years of neglect, or to spend hours banging their heads against bureaucratic brick walls, disillusion will set in, membership will fall away, and enthusiasm for civic duty will be lost for ever.