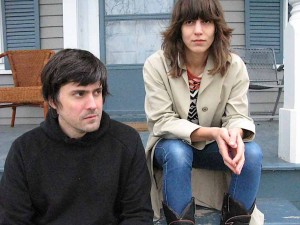 Each time The Fiery Furnaces perform in their adopted home city, the venues shrink in size, the shows becoming ever more intimate. Surely this can’t be a result of diminishing popularity or shrinking ticket sales? This must be a deliberate strategy, when the sibling songwriting team of Eleanor and Matthew Friedberger jump down from The Bowery Ballroom to The Mercury Lounge, and for this gig, to one of NYC’s tiniest joints, the Rockwood Music Hall on the Lower East Side. Admittedly, they were playing a two-night stint, and at least it was booked in the more recently opened Stage 2. The older Stage 1 is so minuscule that the mixing guy has to clamber up into an eyrie above the door, thereby enabling at least 30 folks to inhabit the floor-space. More of a closet than a hall. Both of these Rockwoods are attractively snug for close-up musical experiences, but not the kind of habitat for well-established artists. Even so, Martha Wainwright did run a low-key Monday residency here a few months back. Chris Thile and Tony Trischka have also appeared recently.

Although the Fiery twosome represent the heart of the Furnace experience, this was an unplugged set, without bass and drums. The band are renowned for their consistent efforts to subvert their own risk of complacency, constantly finding new slants to their material, always forcing an unusual degree of chance and improvisation onto what is fundamentally a rock band set-up. Here was an opportunity to prove their songwriting mettle, stripping away the repertoire until it took on a new life as a Broadway cabaret routine, or maybe darkening the songs with a harder-edged Weimar-era confrontationalism.

In the end, it was shocking that the Rockwood was so depopulated. There was room to move, space for the majority of the audience to sit, and studied silence enough for all to savour the refined experience. This was just as well, because few young rock bands are armed with as much profound substance as the Furnaces. Instead of registering any frustration for the lack of serrated guitar solos and jerky rhythm-shunting, it was almost as though the regular incarnation of the band was easily forgotten, as the acoustic duo became an in-the-moment all-that-mattered entity.

Normally, Eleanor can be not so expressive, physically, in front of the fully rockin’ formation, deliberately deadpan. But here, it was as though she felt more of an onus to gesticulate, emphasise and otherwise shimmy, growing into the intimacy of the set. Meanwhile, Matthew was restricting himself to the piano, crafting an entire rhythmic structure via his constantly shifting ornamentations and changes of thrust. Brother and sister both adopt the flopping fringe hanging over the eyes approach, paradoxically hinting at some degree of introversion. This is mixed with elements of a completely confident ease with the exposed nature of this performance. It was instructive to hear the details of the words in these surroundings. It was always confirmed that this duo pen the most unique, poetic and profound lyrics amongst any of the younger rock outfits. They are completely out on their own, in the manner of an older generation of artists such as Captain Beefheart, David Bowie, Brian Eno and David Byrne.

No wonder Eleanor was occasionally glancing at her words, leafed on a music stand. These are some of the most involved narrative streams in popular (and unpopular) song. They never sound forced, stiff or ungainly due to such a heavy content: the streams always flow naturally and conversationally, imbued with humour, surprise and emotional precision. Exposed in front of a piano, the dynamic subtleties of her voicings were more apparent. Even though the vaulting collision of a fully-amped rock combo was lost, the audience gained another, more natural set of swoops and dives.

Eleanor seemed to become a tad irritated that Matthew would invariably finish a song with an emphatic embellishment. It was likely that she’d prefer a sudden end. A sharp silence. This became a running joke as the beyond-an-hour set unwound. Matthew would insist on an almost involuntary trill. A concluding flourish.

The Friedbergers were saying that many of the songs were receiving their first airing. It wasn’t quite clear whether this was because they were numbers that the fully electrified band have consciously chosen to avoid, or whether this was by sheer happenstance. It was always evident that the Furnaces songbook was invulnerable, but it was nevertheless instructive to have this confirmed live onstage. Many of their complex-yet-catchy ditties deserve to stand beside the works of, let’s say, Brecht and Weill. The pair could easily enjoy a week at the Metropolitan Room, or The Oak Room, although this might perturb the regular diners at these venerable jazz cabaret bastions. 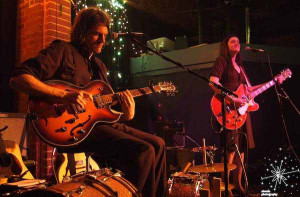 Holly Golightly and the Brokeoffs

Another night, another duo, although this pair do their utmost to sound like a fully-loaded band. They pretty much admitted onstage that their twosome state is a matter of enforced budgetary measures. Holly Golightly is an English singer and guitarist, though she’s now dwelling in rural Athens, Georgia, with Lawyer Dave, who’s the American half of this band. Yes, he’s a one-man-band Brokeoff, although at least in their fantasies there is an optimum state as a multi-being operation. In the meantime, the Lawyer combines densely chewed-up guitar with a foot-operated mini drumkit.

The foundation sound could be described as rambling, rickety, rumbling, rockin’ country blues, earthy Americana, garage punk or even ‘billy soul. The words tell stories, and even if the songs are originals, they remain indebted to nearly a hundred years of black and white Stateside roots. There’s humour too, running as a central vein, with Golightly’s particularly English self-deprecation, gloominess and mischievous mockery delivered with a cheery casualness.

The duo’s set was condensed to say the least. Barely had they been playing for more than 20 minutes when there was talk of there only being a few more numbers left. This may well have been the usual banter between Golightly and her Lawyer, as in reality the songs kept coming for at least twice that amount of time. Golightly was quipping about how they had to make way for the ‘disco’, which was actually a ’round midnight freebie set by another combo.

Golightly is now something of a veteran, boasting two decades of recording activity, beginning with her London roots as a member of various outfits led by the garage rock extremist Billy Childish. The four-year history of this duo set-up admirably continues that lineage, though with much less truculence, savagery and excess. Now, this pair are still rough and raw, but there’s more attention paid to relaxed songcraft and more amiable forms of folk music. Despite the fact that Golightly and her Lawyer could easily have entertained for a further 30 minutes, this was a good shot of alternative-reality Americana, from down amongst the goats and chickens of the couple’s dusty Athens mini-farm. 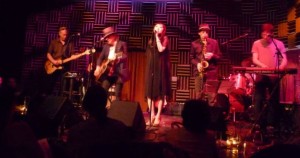 Finally, we get to a full band line-up, and a lusty amount of hardcore amplification. Gary Lucas shall forevermore be most famed for his guitaring membership of the final Magic Band of the great Captain Beefheart, back in the late 1970s and early ’80s. This is not to deny that he’s been extremely prolific and artistically successful over the last three decades, but that the Van Vliet legacy is impossible to ignore, not least for Lucas himself.

On the last occasion that his Gods & Monsters played at The Knitting Factory, they suffered from an awful sound mix. This time it was far superior, but they should really bring their own engineer along, as there were so many sudden solo peaks from various players that it was frequently the case that a guitar surge was submerged when there was clearly some rampant string action happening, or the horns wouldn’t be sufficiently prominent at key junctures. Usually, the venue’s sound mixing is fine, so it’s puzzling why Lucas should have been unlucky on two gigs.

It’s important to mention the significant connections held by Gods & Monsters. Although absent for this gig, Jerry Harrison (Talking Heads) is the producer of the band’s latest album, The Ordeal Of Civility, as well as being its occasional keyboardist. Then there’s drummer Billy Ficca (Television) and bassman Ernie Brooks (The Modern Lovers). The horn section of Jason Candler and Joe Hendel are comparatively unknown, when standing next to these new wave veterans.

His guitar style remains in the zone of avant blues, from those Magic Band days, but Lucas also composes with a divergent attention to various rock alternatives, from psychedelic freak-out to folk balladry. When he switches from electric to acoustic, this doesn’t necessarily lead to a softer sound. Sometimes, Lucas can be at his most violent whilst abusing an acoustic axe with a virtuoso elan. The evening’s repertoire contained its moments of extra-curricular variety. Lucas played “Mojo Pin”, one of his two co-compositions with Jeff Buckley, just as a duo with the guesting German singer Jann Klose. Even more of a pace-change was the other vocal guest interlude, with Sally Kwok, revisiting their Edge Of Heaven album of Chinese pop songs from the 1930s. Also, from the new Gods & Monsters album, “Lady Of Shalott” navigated a folksier terrain, best described as psychedelic Medieval, but without relinquishing any deranged intensity.

At the bar, there’s a special beer’n’shot offer, which is not the usual tactic adopted at the Highline Ballroom. It’s quite appropriate, given that quaffing is one of the seemingly favourite bodily functions enjoyed by The Reverend Horton Heat. It’s easy to guess what the others are, as this Texan singer and guitarist openly scrawls his inner self on his songsheet. This power trio’s music is best described as extreme rockabilly, with that old 1950s template accelerated, heightened and punked-up into a beyond-psychobilly explosion.

The Reverend was in a chronological mood, diligently working through his catalogue year-by-year, picking two or three songs from each platter. The only impatient exception arrived with a clutch of newer tunes from the most recent Laughin’ & Cryin’ disc, not least “Drinkin’ & Smokin’ Cigarettes” and “Please Don’t Take The Baby To The Liquor Store”. What did I tell you? Although Heat appears to be toying with the concept of relinquishing such habits (at least during these songs). The Reverend was flatly refusing to make any selections from We Three Kings, his Christmas collection. Such a historical over-two-decades storyline was the evening’s only concession to sensible behaviour.  Otherwise, the threesome gave one of their more hyperactive displays of gnashing rockaboogie, pandering perfectly to the raunchy crowd of tattooed, greasy-quiffed and be-leathered revellers.

The energy and momentum was wonderfully sustained for around two hours. The only resting moments arrived briefly when the band paused several times during some recorded background sequences, the house lights shut off completely. The uninitiated might believe that this was set’s end, but it’s a regular tactic observed by the Reverend, only signalling an intensified, renewed lurch into even more overdriven rockin’. Heat’s razoring guitar is central, but his bandmates contribute equally to the momentum. Upright bass player Jimbo Wallace is a loyal sidekick, enduring the hard slog of road life (blood was once spilt between he and the Reverend, in a car park at the back of a club). He enjoys perching on his vertically-positioned instrument, whilst slapping out brutal riffs. Drummer Paul Simmons specialises in thundering multi-headed expression, mixing the headbang of rock with the light skip of ‘billy. A Horton Heat gig may well be a predictable affair, but there are no signs of the formula weakening, the spirit flagging or the audience appetite being sated. There were no lapses laying ground for the mind to wander. The crowd was always magnetised by the raw parade of macho moves, leavened by songwriting wit, bolstered by a wily sense of humour. The Reverend is an entertainer without compromise.