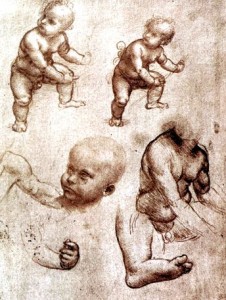 To celebrate the Queen’s diamond jubilee next year, ten of the Royal Collection’s finest drawings by the Renaissance master Leonardo da Vinci will travel to five museums and galleries across the United Kingdom, starting with the Birmingham Museum and Art Gallery from 13th January-25th March 2012.

The exhibition has been selected to show the extraordinary scope of Leonardo’s interests – painting and sculpture, engineering, botany, mapmaking, hydraulics and anatomy – and his use of different media – pen and ink, red and black chalks, and metalpoint. The drawings cover much of his career, and range from designs for chariots and war weapons from around 1485 to the drawing of an old man he did over thirty years later, and which is believed to capture Leonardo’s feelings towards his own impending demise.

Through drawing Leonardo attempted to record and understand the world around him. He maintained that an image transmitted knowledge more accurately and concisely than any words, although some of his drawings are extensively annotated.

Beyond a handful of paintings, most of Leonardo’s great projects were never completed. His surviving drawings are therefore our main source of knowledge of his extraordinary achievements. Rita McLean, Head of Birmingham Museums and Heritage, said, “We are delighted that the Royal Collection has chosen Birmingham Museum and Art Gallery to be the first UK venue to show this outstanding exhibition of drawings by Leonardo da Vinci.  This will be a rare and extraordinary opportunity for local people to see works by one of the world’s greatest artists, as part of the city’s celebrations of the Queen’s Diamond Jubilee.”

Because of their fragility the drawings cannot be permanently displayed, so to have them in Birmingham is undoubtedly a great honour and a tribute to the city’s cultural reputation.