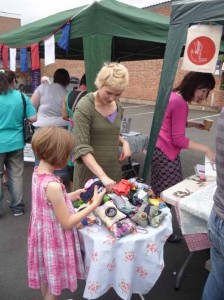 This month sees Stirchley Community Market return to the open air for the first time this year after spending the winter months indoors at Stirchley United Working Men’s Club.  The market has also moved from the fourth to the first Tuesday of each month – with the exception of April when the event takes place on the 12th.

Having had a hugely successful launch last summer with thousands of shoppers visiting the July, August and September markets, organisers took advantage of the immediate popularity of the market to run a scaled-down series of events indoors at the WMC and have also spent that time planning for what they hope will be an even more successful year in 2011.

When it began last summer, the market quickly embedded itself as a part of the Stirchley community, as much for the relaxed and welcoming feel as for the variety and quality of goods on offer, and by continuing to offer an opportunity to local makers and artisans as well as businesses already established on Pershore Road.  Stirchley Community Market is destined to become a key part of the calendar for residents, commuters and visitors alike this year.

The market is run on a voluntary basis by a committee of residents and businesses from the Stirchley area and its primary aims are to promote Stirchley as a vibrant, unique and eclectic place in which to shop, live or run a business.

Anyone wishing to find out more about the market can do so by visiting the website: stirchleycommunitymarket, please do get in touch if you are interested in helping out as a volunteer, coming along as a trader or just want to visit the market to pick up a bargain.