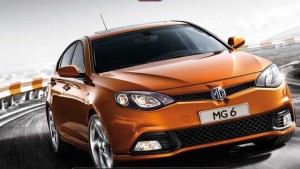 In amongst the seemingly non-stop economic gloom there’s been at least one positive news story this week with the launch of another new car to be made at Longbridge.

Shanghai Automotive(SAIC)-owned MG Motor UK unveiled their new MG6 saloon yesterday, ahead of its opening UK sale date in July. This will be the second car to be produced at the plant under its new ownership. Work on the MG6 sports hatchback is already under way in advance of a full launch in the spring.

SAIC have 39 dealers around the country ready to start selling the new MG and are believed to be on the lookout for more. Prices for the new saloon are expected to start at around £17,000, although production targets have not yet been released.

With SAIC having already pumped in £45 million worth of capital investment into Longbridge,  in addition to hundreds of millions of pounds in new product development, there is a feeling of optimism that the plant’s fortunes are finally being turned round following the closure of MG Rover with the loss of 6,500 jobs in 2005. Although employees now number in their hundreds rather than the tens of thousands who worked at Longbridge during the factory’s heyday, the arrival of the new MG models can only be seen as good news for the region.