Birmingham Lunar New Year 2023: Event programme and what to expect.

From energetic lion processions at Bullring & Grand Central to spectacular fireworks in Southside, Birmingham Hippodrome and Chinese Festival Committee Birmingham reveal what to expect at the city’s Lunar New Year celebrations this month.

Festivities will begin on Saturday 21st January with a full day of free performances and activities in partnership with Bullring & Grand Central. 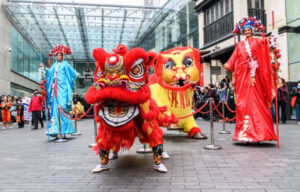 The much-loved lion procession will kick start the celebrations at midday. Shoppers will then be treated to traditional singing, dancing and music, high energy drum performances, Shaolin Kung Fu demonstrations, and more between 12pm–5pm.

Visitors are invited to learn how to write a piece of Chinese calligraphy and draw a traditional painting by taking part in cultural workshops throughout the day. There will also be the chance to capture the celebrations by taking a photo with Pom Pom, the ten-foot Panda.

Festivities continue at Hippodrome Square in Southside to mark the official New Year’s Day on Sunday 22nd January. Sponsored by Uber Eats and in association with Southside District and The Arcadian, the event is full of community performances, street food, face painting, fairground rides and family activities.

The opening ceremony at 12pm will feature Dim Jing – the traditional waking of the lion – followed by a variety of performances on the main stage, including classical fan dances, lion dances, and face changer performances alongside dance and music from the local community.

The event will culminate with a closing ceremony and a spectacular fireworks finale at 5pm to welcome in the New Year.

James Wong, Chair of the Chinese Festival Committee Birmingham said: “We can’t wait to take part in the city-wide celebrations and bring Lunar New Year festivities back to Southside. The weekend full of events, activities and performances is set to enchant and thrill all visitors.”

Chris Sudworth, Director of Artistic Programme at Birmingham Hippodrome added: “We are thrilled to be co-producing Lunar New Year with the Chinese Festival Committee again, as well as continuing our partnership with Bullring & Grand Central.

“The event will not only shine a spotlight on the fantastic talent within our local communities but bring visitors together to welcome in the Year of the Rabbit. We look forward to seeing everyone at the festivities in Bullring & Grand Central and Southside, which have been made possible thanks to our incredible partners and sponsors.”

More information can be found here.