Simon Hale gets to grips with the big Christmas show at the Alexandra Theatre.

The multi-award winning musical Dreamgirls is making its Midlands debut at the Alexandra Theatre, Birmingham. As a love letter to Motown, it has already brought a deservedly joyous response.

With six Tony awards following its 1981 premiere on Broadway, this electrifying show brought the audience to its feet on press night not only at the finale but at the end of Act One. 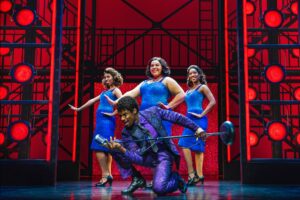 Nicole Dennis, a semi-finalist on ITV’s The Voice in 2019 singing alongside Jennifer Hudson, pulled off a tour de force with her impassioned solo And I Am Telling You before the interval – even if it was with a little too much force at moments in terms of decibel levels.

Playing Effie, one of three Black singers based loosely on The Supremes, Dennis uses her big number as her way of standing up to the chicanery surrounding her unwarranted demotion from lead singer – and the effect was inspirational.

Effie, Deena (Natalie Kassanga) and Lorrell (Paige Peddie) are three friends determined to achieve their musical dreams in a 1960s segregated America, at first appeasing white audiences with their slow songs and tidy beehives before imposing their own individuality in rousing R&B and soul style.

They are encounter their own internal jealousies and a cutthroat music industry that has been taking an unfair advantage of young Black women, especially in the guise of their own backstabbing manager Curtis Taylor, with a villainously Matt Mills in the role.

Taking their first step to stardom as backing singers to Jimmy Early, played with James Brown-like energy and eccentricity by Brandon Sears, the trio forge their own path to a satisfactory conclusion in this fast-paced and almost sung-through show.
Songs like One Night Only, Listen and the title track Dreamgirls evoke an era in which music was undergoing a thrilling evolution and to which today’s Black female artists owe so much.

Supporting a cast that is without exception top-class are glamorously glitzy gowns and moving lighting rig sets designed by Tim Hatley that make the action appear seamless, spotlights by Hugh Vanstone for instant costume changes, and an excellent orchestra conducted by Simona Budd.

A quick warning that there are flashing lights, but nonetheless this is a show not to miss.

Dreamgirls is in performance at the Alexandra Theatre, Birmingham until Saturday, December 31, 2022 (Box office 0844 871 3011 ATGtickets.com/Birmingham)