Contrasts: light and dark; levity and gloom. Puccini’s La Bohème plays on the shades of human experience. And Welsh National Opera’s production portrayed these to the full. Romantic love as opposed to infatuation; wealth versus poverty; joie de vivre and its antithesis – death and grief.

The contrasts are echoed in Puccini’s score: as the libretto moved from moments of extreme delicacy to points of intense drama, so the orchestra moved from plucking of strings to seamless melody, shifting the mood from the frivolous to the profound, and back again.

A group of bohemians live in penury in Paris. Full youthful energy, they use their wits to get by, dodging landlords who demand rent and waiters who seek payment. Rodolfo, performed by tenor Luis Gomes, and Marcello, performed by baritone Germán E Alcántara, have voices full of depth and resonance. Together with Mark Nathan, baritone, as Schaunard, and David Shipley, bass, as Colline, their performances were humorous, and their portrayal of lads being lads was animated. Yet contradictions are implicit: their impoverished flat overlooking the Paris roof tops is cold, but love, they declare, burns like a stove. 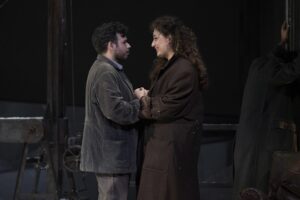 And then a shift: Mimì, sung by soprano Anush Hovhannisyan, calls for help. As she sings ‘Mi chiamano Mimì’, Rodolfo feels the love, ardently and passionately. Hovhannisyan’s voice was beautifully controlled, if somewhat overpowered at times by the orchestra, as was the duet which followed. However, the effect of Rodolfo and Mimì leaving the stage, silhouetted as they walked hand in hand on a wall, was enchanting.

Act II’s cafe scene, exuberant and playful, continued to contrast lightness with shadows. It is Christmas eve: the bourgeoisie are shopping and carousing, fireworks illuminate the sky. Alongside this is Paris’ underbelly: prostitution, heavy drinking, and the precarious position of women, dependent on men to support them. Musetta, performed by sopranno Aoife Miskelly, is one such, with her elderly, but wealthy, admirer in tow. Musetta’s waltz, Quando men’ vo, is a blatant appeal for Marcello to fall for her charms, so that she can secure a new lover. Three duets which juxtapose the love of Mimì and Rodolfo with the flirtation between Musetta and Marcello, whilst Colline and Schaunard observe cynically from the rear of the stage, were thrilling to hear.

Act III opens to a set which was filmic in quality: against a subdued backdrop, customs officers in grey operate a city tollgate, the comings and goings reflected in orchestral pizzicato. Mimì enters, shivering and coughing, and the music became languid and doleful. The earlier joy of Mimì and Rodolfo has gone. The poverty of their lives is killing her: Mimì needs to be supported by a rich man and they cannot be together. Their duet, Soli, l’inverno è cosa da morire, the melody supported by the full orchestra, was a hugely dramatic moment, and Hovhannisyan’s voice came into its own.

The finale brings out the humanity of the friends, as they pawn their possessions to pay for a doctor for Mimì. Once again, poverty is to the fore, as Colline sings a beautiful lament to his great coat which he has given up. Mimì’s death, reflected in an orchestral crescendo, and Rodolfo singing the single word, Mimì, was a powerful and moving moment.

The production was directed by Caroline Chaney and designed by Stephen Brimson Lewis. Music was performed by the Welsh National Orchestra, conducted by Pietro Rizzo.

Well worth seeing, it is at the Birmingham Hippodrome until 12th November (birminghamhippodrome.com) and then on national tour (wno.org.uk).