Rockers from around the globe make pilgrimage to Black Sabbath bench.

A pilgrimage of rock bands from across the world is resulting in multiple picture posts of them posing on the Black Sabbath bench in Birmingham.

Vocalist and guitarist Steve ‘Lips’ Kudlow, from Canadian heavy metal band Anvil, was one of the latest rockers to be pictured at the canal bridge venue on Broad Street in the city’s Westside business district – both alone, and then with fellow band members.

Ian Scott (pictured), the rhythm guitarist and co-founder of Anthrax from New York City, who was also thrilled to sit on the bench during the band’s Birmingham gig on their 40th anniversary tour of the UK last month. 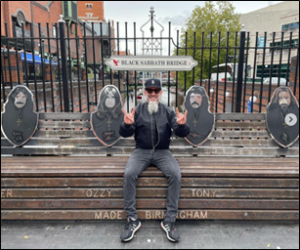 Also pictured on the bench via social media is the thrash metal band’s drummer Charlie Benante, pictured with Carla Harvey, one of the frontwomen of Butcher Babies, a heavy metal band from Los Angeles, California.

And Adam ‘Nergal’ Darski, the lead guitarist and lead vocalist of Polish extreme metal band Behemoth, also hugged Ozzy on the bench when he visited Birmingham.

A Facebook post of an unnamed band member from Danish heavy metal band Mercyful Fate has also been snapped enjoying the sun on the bench this summer.

Mike Olley, general manager of Westside BID and the man behind the Black Sabbath bench on Broad Street, said: “We’re amazed by how many people are sitting on the bench every day, and early estimates are looking at more than one million people a year.

“But the fact that other famed rockers from Europe, America, Canada and beyond are also making a bee-line for the bench when visiting Birmingham is fantastic.

“The bench really is becoming one of the most popular tourist attractions in Birmingham – from mums and dads taking their little kiddies for a picture all the way to the famous names from heavy metal wanting to be seen in the lap of their music gods.”

● Visitors to Westside can now have their picture taken on the Black Sabbath bench via a clever camera app. For more details, visit blacksabbathbench.co.uk.