Half Man Half Biscuit don’t play Birmingham very often. Bilston yes, Leamington a few times but rarely Birmingham. Then again, seeing as their last time here was the O2 Academy what must have been seven or eight years ago, I don’t blame them. That place really is horrible, its partner-in-corporate-ownership the Institute is a bit better even if roadworks outside make finding it by car hard and getting parked harder. May as well get the train and hope it finishes early. If it makes you feel better you can pretend you’re eighteen, still call it Digbeth Civic Hall and you’re going to watch the Exploited.

Support The Humdrum Express went down well, asking for a lift home or if anyone knew of any jobs going, which in a way continued the early eighties feel. There was a bigger crowd than I’d expected; perhaps it was the novelty of a Birmingham gig, perhaps there was nothing on the telly or the trendy young things of Digbeth fancied making a night of it. 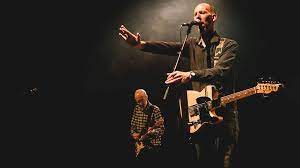 I didn’t know the tune the band took the stage to, although I could tell it was ELO so a nice nod to local culture there. The Fred Titmus song opened proceedings, going right back in time before a newish one in the shape of Alehouse Futsal, from the last but one album although given HMHB’s lack of productivity over the years that’s not saying much.

Time Flies By When You’re A Driver Of A Train, Bob Wilson Anchorman, We Built This Village On A Trad. Arr. Tune, all the old favourites were aired, mixed with newer songs and a few classic asides from Nigel, who has apparently never tasted vodka. Who’d have guessed that? He rated former Everton goalkeeper Neville Southall highly.

The venue might have changed a bit from its old incarnation, but there was still a good atmosphere even if the sound quality was a bit inconsistent. The trouble was that a couple of songs in and I realised I couldn’t hear much except guitars. Moving back a bit helped. Even then though, it was a long way from perfect.

The rest of the audience didn’t seem to mind, and the unsponsored moshpit was bobbing along, although judging the age of most they’d be feeling it in the morning. I didn’t join them. What I do like about HMHB fans is that although many of them seem to attend every gig the band play they’re a lot more welcoming than the hardcore following of other acts. Ask the name of an obscure song and you’ll be told with a smile rather than a sneer and there’s none of the “Where were you at Cartmel on a freezing cold night in November?”

There was another ‘tribute’ to Birmingham with a cover of the Prefects’ Barbarella’s and an HMHB gig wouldn’t be complete without the immortal Joy Division Oven Gloves, although there were no 24 Hour Garage People. Perhaps inflation has caught up with this anthem to late-night impulse buying.

The encores featured yet another local reference with the title of She’s in Broadstairs changed to Broad Street. I thought playing a cover earlier the set might mean that the traditional encore might not feature but Magazine’s A Song From Under The Floorboards came next and the evening was rounded off with The Light At The End Of The Tunnel, which is more a nod to the entire country at the moment than anything particularly local. Let’s hope it’s not so long next time.

One thought on “Review: Half Man Half Biscuit”