Dave Woodhall has a couple of days at the Moseley Folk & Arts Festival.

I thought I was done for the summer but the chance came up for an encore at Moseley Park, so Friday afternoon saw me unexpectedly listening to Carl Chinn.

No, the patron saint of Birmingham hasn’t taken up singing, he was playing to a rapt audience at the Speakers Corner tent, where the arts part of Folk & Arts was headquartered. Carl was talking about the Peaky Blinders and other turn of the century Birmingham gangs. As ever he was enlightening, interesting and above all passionate, putting across the true story behind the TV myth – these were not folk heroes, but rather thugs and petty criminals, the real heroes of the time being the law-abiding inhabitants of the poorer parts of the city, coping with horrendous infant mortality, insanitary living conditions and constant poverty.

In contrast were two doyens of the Birmingham Comedy Festival. Lindsey Santoro is, to put it politely, a bit graphic, a lot unrepeatable and even more funny. “I’m from Northfield. Any more tramps in here?” And so on; there’s a lot about sex and its aftermath, a fair bit of swearing and the young lad she pointed out in the front row probably did learn quite a lot of things he wouldn’t learn at school.

Ivo Graham isn’t from Northfield, or anywhere near it. He is, though, an unrepentant posh twat who does posh twat on posh twat humour that went down a storm, despite him being upstaged by a member of the audience who went to school with Daniel Craig for six weeks. It’s obviously made an impression, just as Ivo did. 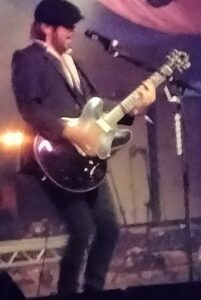 Then it was a saunter through the park just as Supergrass were taking to the main stage. I’d been told what a phenomenal live band they are, and they were. Tight, powerful and melodic; just what was wanted to round off the day.

Forgive me for not knowing too many of the songs they played, but they all sounded as good as I’d been promised. Saying “This one’s for Grace” would have got much of the audience onside given the demographic at the front of the crowd and even I knew the words to Alright. It was 1995 all over again even if I didn’t get my hair back.

Set closer Pumping on Your Stereo got the audience bopping and singing away, while the encore of Strange Ones and Caught By The Fuzz set the seal on what was an ideal festival performance. On the way out a busker was performing close to the exit and a band were thrashing away in the Fighting Cocks. Moseley folk following Moseley Folk.

Previous commitments meant I couldn’t make day two but on Sunday the threat of rain wasn’t enough to keep me from the imminence of John Cooper Clarke. I should have got there earlier because it was standing room only an hour before the Bard of Salford was due to takes the stage, and standing out in the open at that. Luckily the rain kept off as he strolled on and despite, as he put it, being unused to doing gigs in daylight hours, delivered a quickfire 45 minutes starting with a tribute to hire cars. Apart from being one of our greatest poets, John’s also a very under-rated comic, touching on getting old – “My blood group got cancelled two weeks ago” – and his lengthy non-therapeutic use of opiate drugs, which “in Manchester is virtually compulsory”.

It’s a given to do your greatest hits at a festival. Beasley Street was followed by an update on modern times, Beasley Boulevard –“There’s a pub but the regulars are barred” – and as the rain began, an encore featured a one-word audience participation during Twat. It was worth the wait.

I briefly caught Tat Vision talking about their recent masterpiece, the Four Lads In Jeans statue outside New Street station and a few other things before making my way once again to the main stage for Jethro Tull. Surprisingly not topping the bill, their current tour is billed The Prog Rock Years, which makes me wonder when it was that Tull haven’t been prog rock. 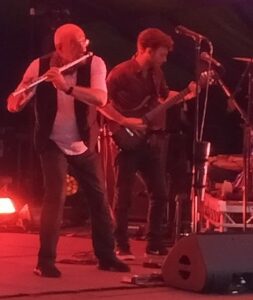 Ian Anderson knows his audience, which is naturally the oldest of the festival, and still knows how to put a band together. They run through the standard Tull anthems, a few lesser-known ones and some that date back to the sixteenth century, managing to avoid sounding dated and showing off the band’s musicianship. And yes, Ian does still play flute standing on one leg. Jethro Tull are every bit as much a British institution as John Cooper Clarke, and in their own ways they’re both equally entertaining.

Rounding off my festival was another British institution, or rather a couple of the finest modern purveyors of one. Flo & Joan are sisters, neither of them are named Flo nor Joan and they perform an updated take on that quintessential aspect of British humour, the comic song. They’re not exactly Flanders & Swann, but the sentiment would surely have been appreciated.

Flo & Joan are fine observationists, if such a word exists, writing about the perils of a night with too much drunken abandon, lists of friends they don’t like and reasons why, and a humorous look at a serious subject in A Woman’s Walk. A lot of their stuff is of the ‘you had to be there’ variety so there isn’t much point in repeating it. One of them is deadpan, the other more ebullient. Both of them are very, very funny. And very clever. Just like the best comic songs.

And that was it for my time in Moseley. As I left the park a tribute to Janice Long was taking place and The Coral would be be closing the show but again I had to be elsewhere. It had been an eclectic couple of days, the rain mostly held off and I don’t doubt we’ll all be back next year.